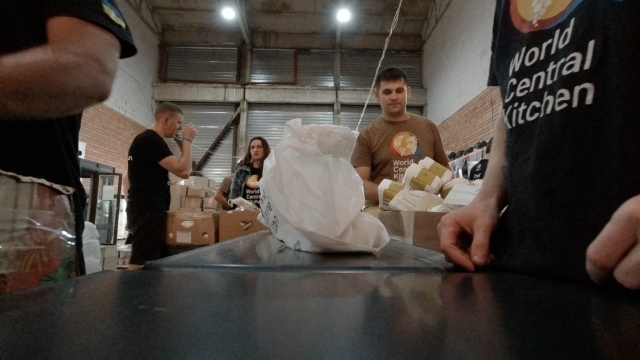 Alisa Liptuga’s job with the famed humanitarian organization World Central Kitchen is to feed those who’ve made it to Odesa from war torn frontline cities.

The bags they provide are sometimes the first meal in days for people fleeing fighting.

"From Mariupol, also Donetsk, from Luhansk — let me ask some people where they from. This people from Mykolaiv," said Liptuga. That city is 90 miles away, under constant Russian bombardment. 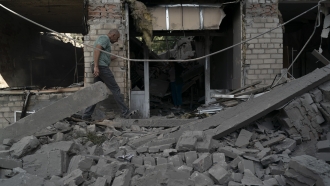 NEWSY'S JASON BELLINI: Is it challenging to get food to Mykolaiv?

ALISA LIPTUGA: We have no fear of going to Mykolaiv. And our drivers, our volunteers, they like soldiers, but food soldiers, food fighters, we call them.

BELLINI: You call them food fighters?

World Central Kitchen is known by those in Ukraine as WCK. Days after the Russian invasion, WCK parachuted into the crisis with its hard-gained know-how. Its "food fighters" have brought nourishment to disaster victims around the world since 2010.

Chef José Andrés, its founder, explained to Newsy that Ukraine is different.

LIPTUGA: I lost my previous job. I lost some of my friends.

Friends who were soldiers.

Liptuga decided to help the war effort by organizing a small food distribution network that delivered meals and treats to frontline soldiers, often in extreme danger. On one such mission she drove into the middle of a battle.

LIPTUGA: In a very quick time, I turn my car. And get out.

BELLINI: Did you get them the food, though?

LIPTUGA: After another day.

In June, WCK hired her to manage their much larger organization in Odesa.

Those working here know the pain of war.

LIPTUGA: At the start, they were all volunteers and they all, 99%, they were refugees. When they came, they had nothing and they cried when they had their first food kits.

BELLINI: The food you're delivering, like pasta, it needs boiling water to be cooked.

LIPTUGA: But even if they don't have the light, they have the fire in their yard.

LIPTUGA: This was the most difficult period of the war. We don't know how to act. We're just now planning how many food kits we need. This winter presents a monumental challenge for this organization that was not built to provide services indefinitely.

ANDRÉS: Winter is coming. We're going to make sure that going into winter we are going to be near those people that because of lack of electricity, of heat, are going to need help from organizations like World Central Kitchen.

To do that, they are teaming up with the nation's railway network, who are experts in logistics across vast distances.

Oleksandr Kamyshin is the CEO of Ukrainian Railways.

OLEKSANDR KAMYSHIN: If railways are the second army, then the World Central Kitchen is the third army for sure. Winter is coming and that's where we cooperate to make our stations points where people can get a hot meal. And, you know, those guys are real, real heroes. They are really, really the third army of Ukraine.

BELLINI: To me, it's amazing that this organization just grew so quickly.

LIPTUGA: I can't understand in my mind how, how, how it can happen in Ukraine now that some Americans came and help all people.