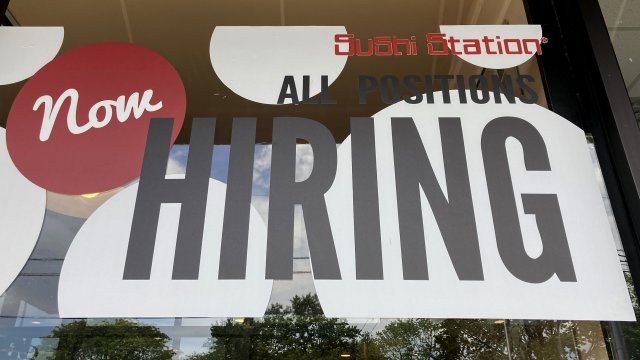 SMS
Perfect Storm Of Factors Lead To Stubborn 'Worker Shortage'
By Bianca Facchinei
By Bianca Facchinei
June 22, 2021
Low wages and health concerns are just some of the issues contributing to the hiring crisis being felt across industries.
SHOW TRANSCRIPT

The headlines are everywhere: business owners across the country saying they can’t hire enough workers. The solution to this problem, according to a majority of governors, is to end pandemic unemployment benefits.

But will this get Americans back to work?

"It just made a financial hardship even more drastic," said Mike Mehterian.

Mehterian lost his job as a senior IT operations manager right before the pandemic struck. He’s been looking for work ever since.

"I've been working more hours trying to find my next job than I was doing when I was actually working," said Mehterian.

He cites a lack of openings suitable to his skills and experience as the biggest challenge. He also says taking a temporary job isn’t as simple as it seems.

"A company spends thousands of dollars to hire, to onboard, and to train up employees. And they're not going to make that investment on somebody who they think is going to leave at the first opportunity of something better," Mehterian said.

He’s one of 9.3 million Americans who remain unemployed … a far cry from the height of COVID-19, but still above pre-pandemic levels. One economist notes a key issue for the industries struggling the most is wages.

"Part of this is that businesses could respond by raising pay," said Gus Faucher, chief economist at PNC.

And there’s another factor that health experts warn is being overlooked: the strain of long-term unemployment has hindered people’s ability to find work or to hold a job.

The loss of health care benefits that were tied to previous jobs can make getting the right help that much harder.

Considering all of the elements, it’s unclear how effective the ending of pandemic unemployment benefits will be. We could find out in less than two weeks, when the next jobs report is out.