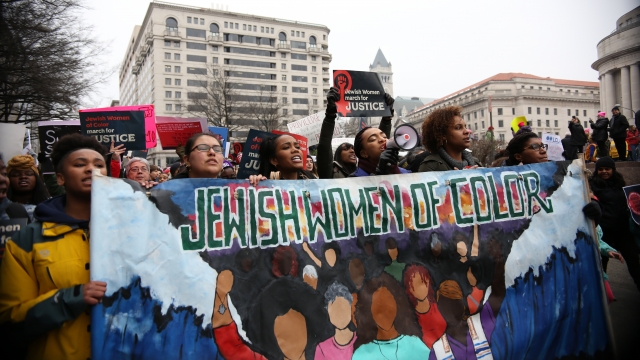 "Just the climate of everything that's going on right now with our leadership, we're just not happy," Courtney Edwards said, while surrounded by her friends who traveled from the deep South along with her to be at the Women's March. "We don't like the direction our leadership is going [as for] women's issues, minorities, and we just wanted to be here and be a part of something and make our voices heard in some way."

Edwards was one of hundreds of people who attended the Women's March in Washington, D.C.

"We need to protect reproductive rights we need to make sure we approach feminism intersectionality," said Paige Strott said. "Meaning that everyone has a voice and you need to realize that women of color are especially hurt in this country and we just need to make sure that we are always fighting and always making our voices heard."

Despite allegations of anti-semitic views from leadership at the top of the Women's March there was a message of unity as hundreds descended on Washington.

"I think the controversy that's happening now with the women's [march] right now is really just kind of what we have already seen that has happened in history," said Sherri Williams, an American University professor and expert on mass media, race and culture. "So there have been patterns of disconnections sometimes because of the clashes that women have had because of different identities. There are a myriad of people a multitude of people who are engaged in trying to dismantle the ways in which oppression works," Williams added.

The allegations date back to 2016 when one of the co-founders of the Women's March says tensions built up between herself, Tamika Mallory and Carmen Perez due to her Jewish identity. Vanessa Wruble was later pushed out of the group after the first march in 2017. Now prominent within the march, Mallory and Perez, have condemned anti-Semitism.

Newsy caught up with Women's March leaders during the event.

"Many Jewish women have come out today [including] Jewish women of color that we've come into relationship together [and] we're working together and it's a beautiful feeling to have your sisters stand with you," Tamika Mallory said shortly after the start of the event. Mallory is one of the co-presidents of the Women's March.

"I think it brought up some really important conversations within the Jewish, black, [white] and really every community around how we build together and it's just a part of doing this movement where that when we have communities organizing together that have never done that before. There are points of tensions there are misunderstandings. Bob Bland, who is co-president of the Women's March, told Newsy in an interview. "[That's] why we have to lean into having direct conversations with each other."

The crowd for this year's rally was noticeably smaller than years past and some believe leadership for the Women's March has to change in order to move forward.

"I thought about not coming  because I know that a bunch of the, a lot of really prominent organizations that I really agree with pulled their support, like the [Democratic National Committee] and Emily's List and it was really tough for a lot of my Jewish friends," said Pamela Kaye. "A lot [of my] Jewish feminist friends weren't sure if they were going to be here."

"There needs to be a serious discussion about the issues and the problems and people that are feeling left out and hurt by statements some of the women have made," said Katie Kelly who traveled from New Jersey to attend the march. "I personally think there should be new leadership. Some of the people should step down so that it doesn't hurt the overall movement as I think it sort of has this time around."