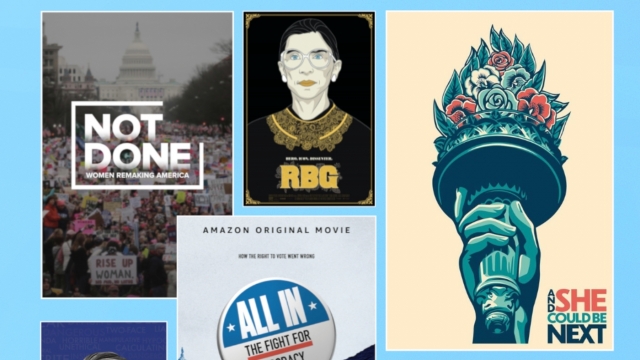 The past couple years has seen a boom of documentaries about change-making women.

From the critically acclaimed "Knock Down The House," about four political newcomers during the 2018 elections, to the Oscar-nominated "RBG," about the life of Supreme Court Justice Ruth Bader Ginsburg, and to "Represent", which includes a Korean American woman running for state office as a Republican in suburban Chicago, there’s a clear demand for these stories.

With the election just weeks away, the demand hasn't slowed down.

Sara Wolitzky: "We wanted to kind of zoom out and look at what are some of the bigger markers and milestones of progress … and also fights for social justice that are led by amazing feminist women."

Sara Wolitzky is the director of the upcoming documentary "Not Done: Women Remaking America," which chronicles the work of women activists, journalists and politicians from the past four years.

"Everything from, like, two women reporters breaking the Harvey Weinstein story to a million women participating in a women's march to even all of the women that were elected in the last midterms."

Mónica Ramírez, activist and founder of Justice for Migrant Women: "These are the people who we march alongside, the ones that we've been building with for all these years. And so, I also appreciated that it really did naturally capture the way the work is being done."

Like other titles in this growing subgenre of documentary film, there's an emphasis on diversity and intersectionality — reminding audiences that the movement for gender equality happens on both sides of the aisle, across different issues and platforms.

Ramírez: "What I have really enjoyed watching over the last few years is that people are actually interested in investing in films like this one and that there is almost, like, an invitation to filmmakers of different backgrounds to help bring forward authentic stories."

Vanity Fair calls this documentary trend a "shakeup of a genre" marking the real-life changes happening in Washington and the rest of the country. With major buzz from film festivals and backing from companies like Netflix, Hulu and Verizon, it's likely that this movement to tell women's stories will continue.

Ramírez: "That is a really important trend that I hope continues, because if films like this one aren't made, then there could have been a time in which all of this history that happened in the past four years was not recorded."