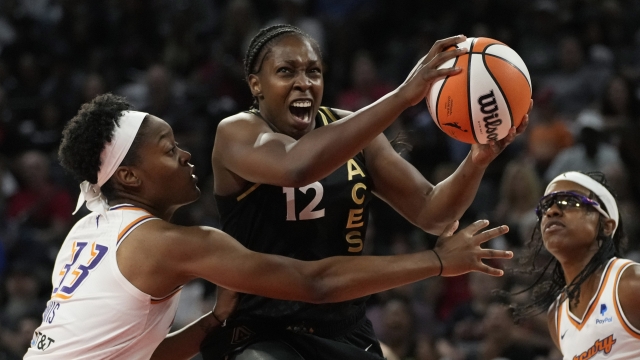 SMS
WNBA Playoffs Head Into Semifinals With Increased Viewership
By Meg Hilling
By Meg Hilling
August 26, 2022
Viewership for WNBA games rose 16% compared to last year, along with increasing social media and website traffic for the league.

The WNBA playoffs are heating up semifinals kick off on Sunday.

It's down to the final four teams: The defending champions Chicago Sky will take on the Connecticut Sun, while top-seeded Las Vegas Aces will battle Seattle Storm.

And league officials say they're encouraged by the points the league is scoring off the court, as well.

Officials say the 2022 season saw a slam dunk in viewership with a 16% rise over the previous year, making it the most watched regular season in 14 years at an average of roughly 379,000 viewers. Online social media engagement was up 36% from 2021, and website traffic was up 79% with 9.2 million visits in total.

"We're going to implement a couple of things, because I feel confident in how we're doing at the league level," said Cathy Engelbert, WNBA commissioner.

The 26-year-old league is known for its play that emphasizes ball handling, competitive games and the marketing of player style.

The year began with a $75 million investment by new investors, including Nike and the NBA.

Mid-season, Engelbert announced that the league is trying to improve the lives of the women who play the game.

"For the WNBA finals, we're going to provide charter flights to our players," Engelbert said. "In the spirit of finding other ways to compensate our players, we're planning to increase the post-season bonus pools by almost 50% to a half million dollars. That would almost double the bonus reach player who wins the championship."

These changes to the player experience come amid conversations about how WNBA players are compensated compared to their male counterparts in the NBA.

On average, NBA players are some of the highest paid athletes in the world, with the average salary for this season coming in around $7.3 million. Meanwhile, the top players in the WNBA are reportedly making roughly $230,000 a year.

The driving force behind these conversations is WNBA star Brittney Griner's detainment in Russia on charges of drug smuggling. Griner, who was sentenced to nine years in prison by a Moscow court in August, had been competing in a Russian league during her WNBA off season and was reportedly earning about $1 million for doing so — a salary more than four times what she was making during her WNBA season.

Looking ahead to next season, Englebert says the league plans to play an all-time high of 40 regular season games, compared to this season's 36. In addition, the league is eyeing opportunities to expand its reach by bringing new teams to cities around the country.

"We have a lot of interest — I'd say probably 10 or 15 cities very interested in hosting a WNBA team," Engelbert said. "So we're meeting here and there, I'll call it, with interested ownership groups. We are looking for the right ownership groups, with the right commitment, the right arena situation, the right city, to support the WNBA franchise."

It's a move the league says is backed by data showing growing public interest, which should be kept in mind during future media negotiations.

"When you look at our viewership versus the NHL, MLS, NASCAR and things like that, some ways on cable, we are at or above them, our social platform and stuff like that," Engelbert said. "How do we get these qualitative metrics as part of the next media deal negotiation?"