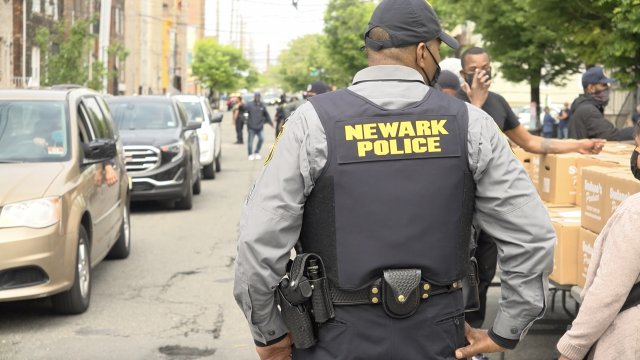 SMS
With No Police Shootings, Newark Makes Case For Consent Decrees
By Jamal Andress
By Jamal Andress
May 5, 2021
As U.S. police grapple with how to reel in use of force, the Newark police department managed to go all of 2020 without a police shooting or death.
SHOW TRANSCRIPT

As U.S. police grapple with how to reel in use of force, one local police department managed to go a full year without a shooting or death — without a single shot fired by officers.

"The Newark police division is embracing the concept set forth in the consent decree. I'm not sure that the city of Newark, or the Newark PD could have gotten here without a consent decree, but they are here," former New Jersey Attorney General Peter Harvey said.

Newark, New Jersey's transformation is perhaps the best argument for widespread adoption of "consent decrees" — a court-enforceable agreement between local police and the Department of Justice to implement reform.

Much like where the Minneapolis and Louisville police departments find themselves now, the Newark PD was the subject of a "patterns and practices investigation" in 2011.

In 2016, just months before President Obama left office, the city of Newark agreed to a court-enforceable consent decree to overhaul the department. Former New Jersey Attorney General, Peter Harvey is the independent monitor in charge of overseeing that agreement.

Harvey: "It takes a while for the inevitability of a consent decree to sink in. But it is inevitable."

Among other things, the consent decree required new policies and training on: use of force, searches and seizures, bias-free policing, body cameras and internal affairs. The department is now "preliminarily compliant" with 40 different benchmarks among those categories.

Harvey: "There have been people waiting for this because this is who they thought they would be as police officers. … They now have something to use to push back on those persons who want to keep things as they are."

Zero deaths and no use of a firearm in an entire calendar year was unheard of for the city of Newark before reforms were put in place. In 2016, the city saw a string of seven police shootings in seven months that left five residents dead.

HARVEY: "'Should I use force?' That becomes the initial question. For Newark PD, they built into the revised use of force guidelines, the precept of de-escalation, as an initial measure, followed by the decision to use force and if so what grade of force."

While Newark reached the milestone in December, the celebration was quickly interrupted. Newark police shot and killed Carl Dorsey just minutes into the new year. The shooting is under investigation by the current New Jersey Attorney General.

But Harvery says this incident doesn't take away from the progress made.

Harvey: "What you want police officers to do is to protect the public, to be trained in a way that they make good decisions — knowing that they're not going to be perfect, and they are going to make mistakes along the line. What you don't want is intentional criminal conduct. Like we saw Minneapolis with George Floyd."