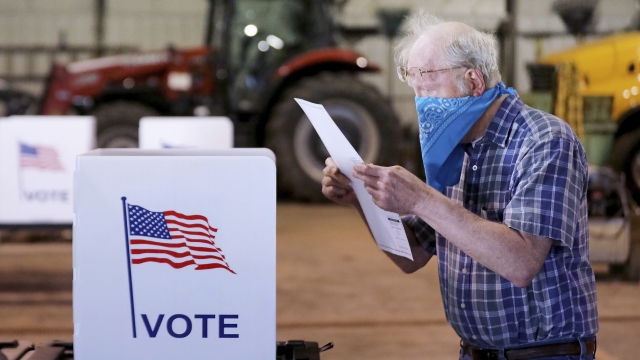 Amid a global pandemic and a statewide stay-at-home order, some Wisconsin voters braved long lines and crowded polling places on Tuesday as the state conducted an election.

"I decided that I was going to get up early, even though I didn't sleep because I was anxious," said Blair Braun. "I got up early, went and voted. Came home threw all my clothes in the laundry, went to shower right away. Washed all of my stuff, and I felt OK and took a nap."

"The poll workers actually had little boxes that they slid your paper ballot in to you, and when they requested your ID, you just dropped it in the box and they pulled it back from you as well," said Brad Schmock.

Newsy spoke with voters around the Badger State about how they felt balancing their health choices with their right to vote.

"I'm debating. I'm hoping that there'll be a window for me to go," said Byron Thompson. "And I did drive by early voting, and the lines and the masks. ... It's really intimidating when you see a bunch of people out with masks on, trying to do something — it's like, man, I don't want to get into that."

Those outside of major cities say they had much different voting experiences, encountering only sparse crowds.

"It's not like I live in Milwaukee. Those people, they're being very brave," said Donna Wolff. "Do I worry about it? Sometimes. But I'm not to the point where I would stay home."

The Republican-led state legislature was unwilling to switch to an all mail-in vote. And a last-ditch effort from Democratic Gov. Tony Evers to delay the primary until June was blocked by Wisconsin's conservative Supreme Court.

That paved the way for Wisconsin to be the lone state not to delay in-person primary voting this month.

Election officials warned of the dangers — including the possibility of putting its mostly senior poll workers at risk.

"Most of the poll workers who I saw today were elderly. And that like just breaks my heart because those people are most at risk," said Braun.

"On some level I’m more fearful for the poll workers than myself. I mean, I think it was all probably women in their ages of 55 or over, and probably most of them 65 or older," said Schmock.

Some Wisconsinites avoided the polls by voting absentee. But that didn't diminish their frustrations.

"I'm disappointed that people have to choose between their health and safety, and having their voices be heard as a citizen of Wisconsin," said Robyn Paloian.

"There's some gamesmanship going on politically, and unfortunately the people paying the price are the citizens of Wisconsin," said Will Tsu.