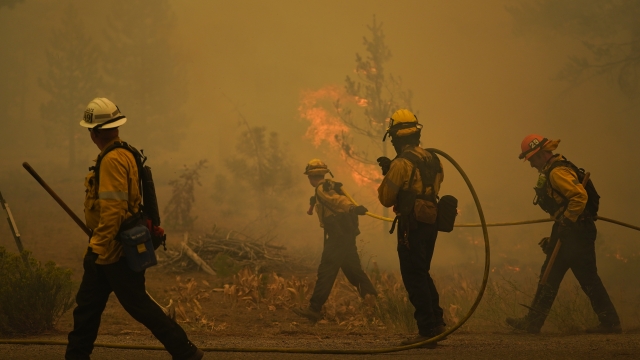 South Lake Tahoe, the year-round vacation haven in California, is facing a long-dreaded threat as the monstrous Caldor Fire makes a downslope run towards the evacuated city.

Firefighters are racing to put out embers flying far and wide, driven by Red Flag Warning winds gusting up to 35 miles per hour. The U.S. Forest Service reports embers landing up to a half mile away from the blaze, raging near the Tahoe basin.

That's why officials ordered an evacuation of South Lake Tahoe's more than 20,000 residents. Many of them sat for hours, Nevada-bound, on clogged highways Monday.

The Tahoe Basin is surrounded by mountains, including the Sierra Nevada range on its east. The Caldor and Dixie Fire, about 65 miles to the north of the Lake Tahoe area, are the only two blazes in the state's history to burn from one side of the Sierra Nevada Mountain range to the other.

The Caldor Fire has scorched nearly 300,000 square miles since breaking out Aug. 14. The threat of fire is so widespread that the U.S. Forest Service announced Monday that all national forests in California would be closed until Sept. 17.

Authorities report more than 600 structures have been destroyed, and at least 33,000 more remain threatened.