Williams, Vindman Kick Off 2nd Round Of Public Impeachment Hearings 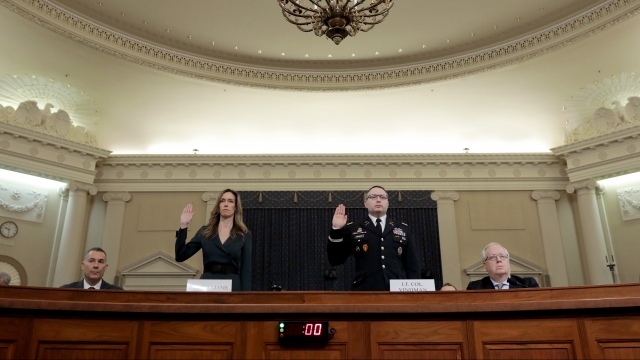 "I was concerned by the call. What I heard was inappropriate. It is improper for the president of the United States to demand a foreign government investigate a U.S. citizen and a political opponent," Vindman said.

The second week of public hearings in the impeachment inquiry into President Donald Trump kicked off on Tuesday morning.

Williams and Vindman listened in on President Donald Trump's July 25 phone call with Ukrainian President Volodymyr Zelenskyy. Both officials testified they had serious concerns about the call.

"I found the July 25 phone call unusual because, in contrast to other presidential calls I had observed, it involved discussion of what appeared to be a domestic political matter," Williams said.

"Without hesitation, I knew I had to report this to the White House counsel. I had concerns, and it was my duty to report my concerns," Vindman said.

Another major topic addressed during Tuesday's hearing was the whistleblower whose complaint is at the heart of the impeachment inquiry.

"I want to make sure that there's no effort to out the whistleblower through these proceedings. If the witness has a good faith belief that this may reveal the identity of the whistleblower, that is not the purpose that we are here for. I want to advise the witness accordingly," U.S. Rep. Adam Schiff said.

"Lt. Col. Vindman, you testified in the deposition that you did not know who the whistleblower was, or is," U.S. Rep. Devin Nunes said.

"I do not know who the whistleblower is," Vindman said.

The subject of bribery also came up during the proceedings.

"Bribery does involve a quid pro quo. Bribery involves the conditioning of an official act or something of value. An official act may be a White House meeting. An official act may be $400 million in military aid. And something of value to a president might include investigations of their political rival. The reason we don't ask witnesses that are fact witnesses to make the judgment about whether a crime of bribery has been committed or whether, more significantly, what the Founders had in mind when they itemized bribery or other high crimes and misdemeanors, is you're fact witnesses. It will be our job to decide whether the impeachable act of bribery has occurred," Schiff said.

President Trump has criticized Williams and Vindman, along with multiple other officials, since their closed-door testimonies. They responded to that criticism Tuesday.

"I want to say that the character attacks on these distinguished and honorable public servants is reprehensible. It is natural to disagree and engage in spirited debate. This has been the custom of our country since the time of our Founding Fathers, but we are better than personal attacks," Vindman said.

"Are you a 'never Trumper?'" Himes said.

"I'm not sure I know an official definition of a 'never Trumper,'" Williams said.

"Would you describe yourself that way?" Himes said.

"Would you call yourself a 'never Trumper?'" Himes said.

Williams and Vindman were the first of nine witnesses scheduled to testify during open hearings this week.