Will Ferrell Lip Syncs 'Drunk In Love' On 'The Tonight Show' 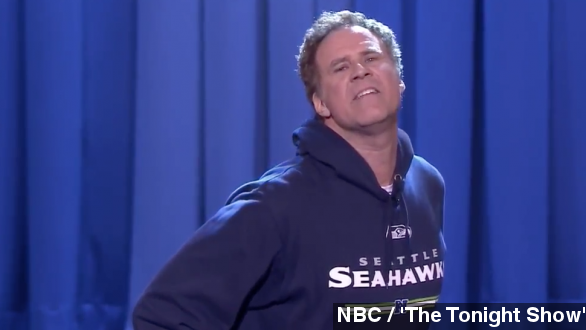 “Next thing I remember is our beautiful bodies grindin’ up in that club. Drunk in love. We be all night!”

Will Ferrell killed in one of Jimmy Fallon’s famous lip-sync battles Sunday night. It was a special, post-Super Bowl episode of “The Tonight Show.”

Ferrell and Kevin Hart, co-stars in the new movie “Get Hard,” had been at the game, and then got competitive on their own in the battle. Ferrell also sang “Let It Go.” Hart did John Legend and Katy Perry.

Jimmy called up the reserves: he brought out pal Drew Barrymore to recreate “Time Of My Life” from “Dirty Dancing” with him. She even wore pink. And they even did that famous lift at the end. Well...sort of.

But it was Ferrell’s name that was trending on Twitter well after the show, with viewers saying they were in love with his “Drunk In Love.” We’re hoping Queen Bey gives a shout-out to the comedian for his performance.

Though...her shout-outs are selective. Oprah got a ‘Happy Birthday’ a few days ago. You can dream, Will.

“Get Hard” hits theaters March 27th and “The Tonight Show” is on the road this week, filming in Los Angeles instead of New York.

This video contains images from NBC and Getty Images.