Why Your Flight Keeps Getting Canceled 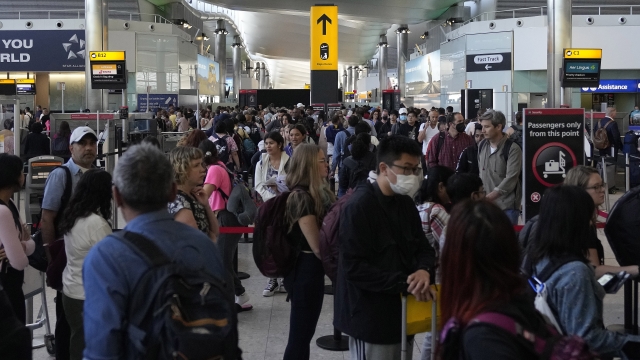 SMS
Why Your Flight Keeps Getting Canceled
By Newsy Staff
By Newsy Staff
July 27, 2022
Problems within the aviation industry have caused many flights to be delayed or canceled, leaving many travelers frustrated and stranded.

Tens of thousands of last-minute flight delays or cancellations have been happening this year. Maybe you’ve experienced one yourself. But what you may not know is that these cancellations are a result of old problems within the aviation industry that are just now boiling over — problems that date back decades, which COVID then turned into a crisis.

And all of it has led to the industry-wide pilot shortage we’re seeing today.

"COVID absolutely knocked the airline industry on its side. And as a result, it has contributed to this pilot shortage that exists that airlines are now working very hard to recover from," Harteveldt said.

Now, airlines have faced similar shortages before. They first saw a major hiring freeze and job cuts back in 2001. The September 11 attacks grounded flights across the country. The industry wasn’t profitable again until 2006, and during that five-year period, the losses grew to over $60 billion. Over the next decade, airlines weathered bankruptcies, mergers, and, of course, the great recession in 2008. By 2018, four airlines controlled about 75% of the market, while many others shut down. Airline employment still hasn't recovered to its peak in early 2001.

And pilots, as you may have guessed, are not an easy role to replace.

"You have to get 1,500 hours of flight experience, which starts as becoming a private pilot. Then you can get other pilot licenses. It can take approximately three years, maybe more, for someone to go from no experience to getting the experience they need to become an air transport pilot and can cost $100,000 or more in training," Harteveldt said.

As new pilots still go through years of training, older pilots are aging out of their roles. The Federal Aviation Administration mandates retirement for commercial airline pilots at the age of 65. That law was passed in 2007 to move the limit from 60 up to 65, hoping to make up for the shortage at the time. There’s already been discussion of moving it again. But Secretary of Transportation Pete Buttigieg has stated that isn’t the Biden administration’s focus.

"The answer is not to keep the baby boomer generation in the cockpit indefinitely. The answer is to make sure that we have as many and as good pilots ready to take their place, to have a stronger pipeline," Buttigieg said.

For the pilots that are in the air, covering for the short staff has taken its toll.

To meet the sudden surge in demand for travel over the last two years, airlines have been overscheduling flights that they just don’t have staff for. Pilot unions from both the U.S. and abroad have raised alarms over burnout and fatigue. For example, several European Trade Groups publicly criticized the CEO of Hungarian Airline Wizz Air for discouraging staff from calling in sick because of fatigue.

"We are all fatigued, but sometimes it is required to take the extra mile," said József Váradi, CEO of Wizz Air

"So the FAA requires pilots to have a minimum of 10 hours of rest a night between their last trip of the day and their first trip of the next day. The pilots who are working say that they are working longer hours, they are tired and they are concerned about fatigue. And that is legitimate. You know, you don't want a tired pilot getting behind the wheel at the controls of a plane," Harteveldt said.

Unions are hoping the shortage will help pilots secure higher wages and more protections against things like burnout.

For example, major German airliner Lufthansa just saw a major strike just this week during a dispute over wages. Pilots and ground staff organized a mass walkout, which caused thousands of cancellations on Wednesday.

And meanwhile, in the U.S., these talks have been dragging on for years. The negotiation process for pilots is unusually complicated, and it’s very difficult for pilots to legally strike in the U.S. The federal government can prevent strikes and labor disputes that would interrupt interstate commerce. And that includes transit workers.

So, the pilot shortage is far from a quick fix: It’s the result of a perfect storm of factors. And the fallout from COVID exacerbated the crisis — from the initial billions in losses and massive job cuts, to the sudden rebound in demand, to the thousands of airline staff members catching COVID during surges.

But now that industry problems have trickled down to consumers, and caused widespread flight chaos, there might finally be some momentum to address the roots of the problem.

"And you have many parts of the air transport industry that are all working to rebuild themselves. It's not just Humpty Dumpty that has fallen off the wall and is trying to put himself back together. It's a whole carton of eggs," Harteveldt said.