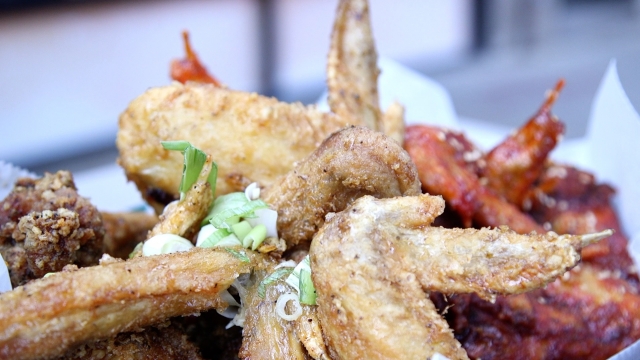 SMS
Why You May Be Paying More For Chicken
By Cat Sandoval
By Cat Sandoval
August 23, 2021
Production of chickens raised for meat was down four percent in the first quarter of 2021.
SHOW TRANSCRIPT

The U.S. Department of Agriculture says production of chickens raised for meat was down four percent in the first quarter of 2021.

In Dundee, Illinois, organic farmer Cliff McConville saw a 20 percent increase in customers last year as stores ran out of chicken and consumers went directly to his farm.

"All of sudden we just had hundreds of customers show up that haven't showed up before," he said.

This year, McConville expanded his chicken farm to meet consumer demand. But even in his store they ran out of chicken wings. He says there were staff shortages at the processing plant, which meant less workers chopping up chicken parts. As for prices, they haven't changed in five years.

McConville said, "I don't like to raise prices if we don't have too, but in this case, it's required."

At the All Grass Farms –

Apprentice Mike Milkowski said, "Feed cost might have gone up five to ten cents a pound a year, but this year we've seen a 20 cent increase which translates into quite a difference in our profit margin."

Feed costs, labor issues, fast food chicken sandwich wars and recent storms in Texas are impacting supply. A spokesman from the National Chicken Council tells Newsy, "while supply is somewhat tight, the sky isn't falling and production seems to be ramping up."

Even restaurant owners are feeling the pinch.

At Chicago's Korean Chicken restaurant Crisp, owner Jae Lee says to offset the lack of chicken supply, he relies on six different distributors. He says typically a restaurant relies on one – and chicken prices nearly quadrupled.

And that price is passed to customers. But it hasn't stopped regulars at Crisp, like Kate Zucker.

"Supporting local has been something that's been so important to me throughout all of this," she said. "It's kind of one of the only things that we did have control over."

Still — price increases can be a turnoff.

"For the most part, all our regulars have stayed," said Crisp general manager Calvin Buckner. "But sometimes you get that new customer, they look at the menu and they'll just be like, 'Too much for me.' I just hope prices go back down, obviously. It's better for everybody."