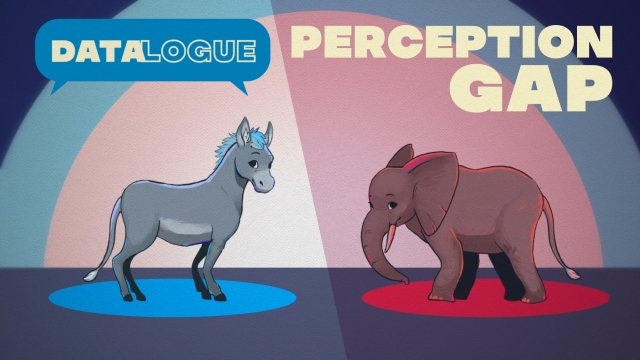 Newsy's Datalogue series breaks down the "perception gap" that makes American politics seem even more polarized than they really are.

It seems like politics dominate our lives these days, and yet studies and surveys show that: As voters, we have a very distorted view of people who vote the other way. Distorted by social media algorithms, opinion-driven news, and national political divisions that give an exaggerated view of the other side. As a result, we believe our political counterparts have much more extreme views than most of them actually do.

This is what researchers call the "perception gap" of American politics. That's the gap between the views we think other voters hold on the issues and the messy reality of political overlap that really exists.

This video includes data from studies by More in Common and Beyond Conflict, as well as original Newsy/Ipsos survey findings.

Kyle Pyatt is a videographer for the Newsy documentaries team. He graduated from the the University of Missouri's Jonathan B. Murray Center for Documentary Journalism as part of the center's inaugural class. He grew up in St. Charles, Missouri, and currently works out of Newsy's D.C. bureau.

Are cows a problem for climate? It depends on how you raise them. Here's how regenerative grazing could help offset the greenhouse gas they emit.

Black women are killed by police at a disproportionately high rate. But even the best-known cases are unknown to the public and overlooked by media.