Why Trump Isn't Pushing This Tool That Can Flag Undocumented Workers 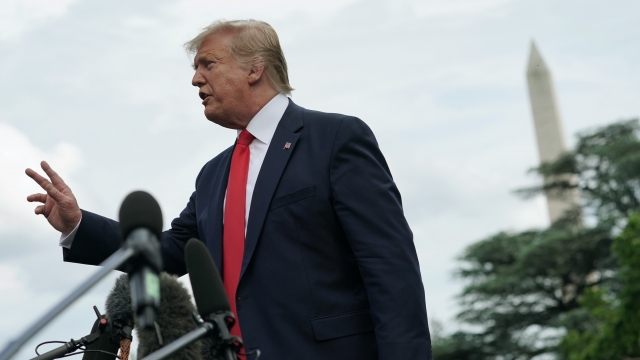 SMS
Why Trump Isn't Pushing This Tool That Can Flag Undocumented Workers
By Ben Schamisso
By Ben Schamisso
July 8, 2019
There's one efficient way to deter illegal immigration that President Trump has not pushed hard for: mandating E-Verify nationally. Here's why.
SHOW TRANSCRIPT

"The one problem is E-Verify is so tough that in some cases, like farmers, they’re not — they’re not equipped for E-Verify."

This recent comment from the president frustrated — of all people — those who advocate for less immigration. But, before we get deep into it ...

"It's a registry for sex offenders."

"No, it's for undocumented immigrants."

Yeah, let's stick to immigration. E-Verify is a government tool that allows businesses to verify the immigration status of new hires. But only eight states require all or most businesses to use it. And conservatives like Mark Krikorian of the Center for Immigration Studies, have long argued that mandating E-Verify nationally would be an efficient way to deter illegal immigration.

"It is the single most important step that we have not yet taken to tighten up access to the labor market."

Multiple studies on state laws that mandate E-Verify show that they are typically efficient at reducing the number of undocumented workers.

"I think the reason for that is because they do go to the source, the reason why so many immigrants move to the United States, which is for employment and higher wages."

Mandating E-Verify nationally is also popular beyond conservative circles. Eight out of 10 Americans support requiring all employers across the U.S. to check that new hires are in the country legally — according to a 2017 Washington Post ABC-poll. So why is the president — known for his hardline views on immigration — taking a much softer stance on E-Verify?

Industries that rely the most on undocumented workers — like agriculture, construction and landscaping — say they already struggle to hire workers, documented or not. And having to check the status of new employees would only exacerbate the labor shortages, they say.

"For other industries that have a viable workforce, you can maybe start to phase in E-Verify, but that's not the reality for the agriculture industry."

"If E-Verify was implemented, it would actually hurt our ability to have team members in the field, it is hard enough to get enough hands harvesting and boots in the field."

The number of employers using E-Verify has surged more than eightfold over the last ten years. A Newsy analysis of government data found that 56% of all new jobs in 2018 were screened with E-Verify. Now, employers who don't use E-Verify — like Rosella Mosby — are required to keep a copy of new hires' driver's licenses and Social Security cards on file in case they get audited.

"It is not our job to check the paperwork — to make sure that paperwork is correct or not — it looks correct ... To us it looks, it looks just like everybody else's paperwork."

To put things into perspective, the American Farm Bureau Federation told Newsy it estimates that undocumented workers fill about 50 to 70% of agriculture jobs.

"It's tough to get a domestic person to come and work on a farm. I hate to say it, but agricultural jobs are kind of at the bottom of the poo pile, right? Like they just are not valued, people don't see the value in supporting our economy from the soil up versus the box up."

But conservatives argue these concerns are overblown because legislative efforts to make E-Verify mandatory would give farmers and small businesses years to prepare for and ease the possible disruptions.

"I think the President does see E-Verify as potentially disruptive. I think that's the concern there. I think he's wrong … because it would be phased in over a number of years, people would be aware of the requirement and businesses would continue to rise up to address that requirement."

Now, the farming industry says it would actually support E-Verify under two conditions: They want those who are currently working illegally to receive work permits, and they want the existing guest worker program to be less restrictive and less costly.

"If those boxes are checked, and the industry is shown and demonstrated that they're able to function under those parameters, you know, then we can support measures for E-Verify."

"We really need to get to where agriculture is thriving in the United States, not just trying to stay afloat and and when we're regulating our farmers to the point where they don't have these options, it really does trickle down in their operations."