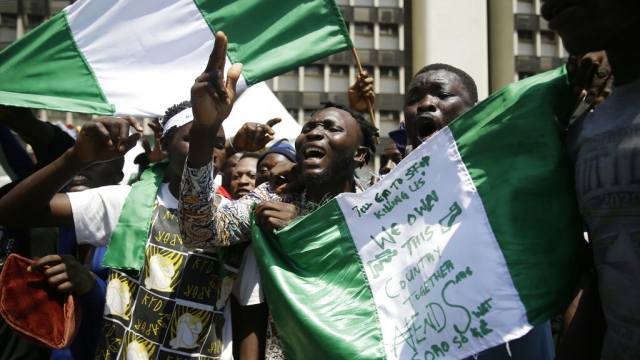 SARS or the Special Anti-Robbery Squad was started as a way to combat crime.

The uproar over police brutality has reached a boiling point in Nigeria.

"In the incident in Lagos alone, 12 people have lost their lives,” said Osai Ojigho, Director of Amnesty International Nigeria.

The military allegedly shot at peaceful protesters on October 20th. Government officials contend there were no casualties. Here’s what we do know.

Multiple people on the ground were live-streaming the protests about abusive police at the Lekki Toll Gate in Lagos before the shooting started.

Just before 7 p.m., one streamer's broadcast caught the sound of shooting as protesters sat on the ground chanting and waving Nigerian flags.

Other videos shot by protesters show men in army fatigues at the gate during the shooting. In one, a soldier can be seen kicking a barricade. The Nigerian army denies there were any soldiers at the scene.

How did the protests against police brutality get to this point? Let’s go back a little bit.

SARS or the Special Anti-Robbery Squad started in 1990’s as a way to combat crime. Journalist Hillary Nnoruka tells Newsy they were effective at first, then things took a turn.

“They started harassing people, especially young men and women. You know,  with beautiful cars, and with good dresses with faster wristwatches,” explained Nnoruka.

He says they would often rob the subjects and that he’s witnessed the harassment first-hand.

“A young guy who was at the bus stop with me he had his laptop knapsack on him, you know, and a car stops, and police officers came out and asked him to show them show them their his phone, he showed the phone, they looked at the phone, they just trying to see what's going through the phone to look for something, look for ways to implicate him, you know, but I spoke to them as a journalist,” Nnoruka recalled.

Once he said that, the officers left.

Tonye Bakare, the editor of the Nigerian newspaper The Guardian, told Newsy he was pulled off a bus at gunpoint and interrogated.

“I showed them my ID card. My press ID. The only thing that saved me that day was my press ID. I can't imagine what would have happened to me if I didn't have that ID card with me,” said Bakare.

Amnesty International recorded more than 80 incidents of abuse in 3 years. They say SARS routinely used torture and brutality to extract information from victims.

In 2020 things came to a head after a police shooting of a man outside of a Lagos hotel.

“How many people government going to kill?”sang protesters in the UK.

Nigerians around the world have also joined in protest. Local officials say they are looking into the October 20th shooting.

“No sitting governor controls the rules of engagement of the military. I have nonetheless instructed an investigation,” said Babajide Sanwo-Olu, Lagos Governor.

SARS was disbanded in early October but protesters say that won’t solve the problem if the same officers are just moved to other units like the newly formed SWAT.

“Nobody was fired, you know, no name was put out as, as the name of someone to prosecuted,” said Nnoruka.

People don't trust the police. That's the that's the biggest issue that the police will have, whether you have SARS Squad or you have  SWAT,” said Bakare.