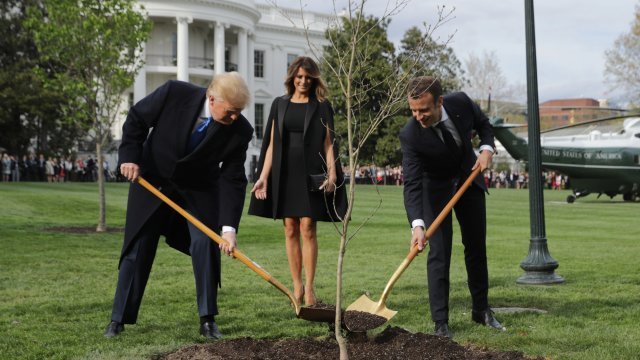 During his visit to the White House last week, French President Emmanuel Macron gave Donald Trump an oak sapling to symbolize the bond between France and the U.S.

The two leaders planted the tree together on the White House lawn. But just a few days later, it mysteriously disappeared.

NBC tried to determine the little sapling's whereabouts Sunday. The White House, U.S. Customs and Border Protection, and the Agriculture Department didn't respond to the outlet's requests for comment.

But the French ambassador to the U.S. finally put the mystery to rest. He said on Twitter that the tree is currently in quarantine.

According to Customs and Border Protection rules, some plants brought into the U.S. are subject to "post-entry quarantine," which is meant to prevent the spread of parasites or diseases.

An official from Macron's office told Reuters the tree is doing well in quarantine and will be replanted at the White House soon.