Why The Number Of Detained Immigrants Has Been Rising For Decades 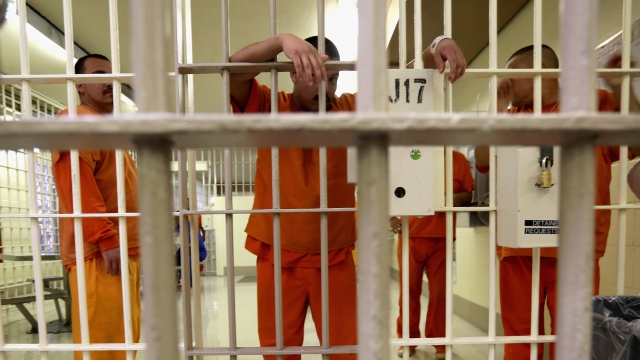 SMS
Why The Number Of Detained Immigrants Has Been Rising For Decades
By Ben Schamisso
By Ben Schamisso
February 12, 2019
There are currently 49,000 immigrants in ICE custody, which is likely higher than ever before. But a deal could reduce that population by 17 percent.
SHOW TRANSCRIPT

Congressional negotiators say they've reached a deal — at least in principle — to prevent yet another government shutdown.

Beyond the $1.375 billion for fencing, and $1.7 billion for other forms of border security and humanitarian aid, the deal also includes a 17 percent decrease in ICE detention beds.

Democrats believe reducing the number of detention beds can force the agency to focus on arresting and deporting "criminals" instead of undocumented immigrants who are otherwise law-abiding residents.

But ICE officials argue that fewer detention beds could mean releasing criminals who are currently detained. The 17 percent decrease included in the deal would bring down the number of detention beds to slightly over 40,000 — compared to around 49,000 immigrants currently in ICE custody, which is likely higher than ever before.

In fact, between 1994 and 2018 the average daily number of immigrants behind bars jumped by roughly 600 percent.

There are countless factors behind that jump. But three important ones come to mind.

First, a heavily backlogged court system means that immigrants waiting for their deportation trials sometimes stay in detention for months or years.

Second, the Trump administration's efforts to arrest more immigrants in the interior most certainly contributes to the surge — especially if we consider the president's opposition to supervised release.

But precisely because of those mandatory detention laws, organizations representing around 3,000 sheriffs nationwide are asking lawmakers not to limit ICE's detention capacity. They argue that because 72 percent of current detainees are mandated to be incarcerated, "any legislation that reduces ICE's detention capacity ... would cripple ICE's ability to detain criminal aliens."

Democrats had hoped to also limit the number of people caught within the U.S. that ICE can keep in custody, but that demand was swiftly rejected by most Republicans.