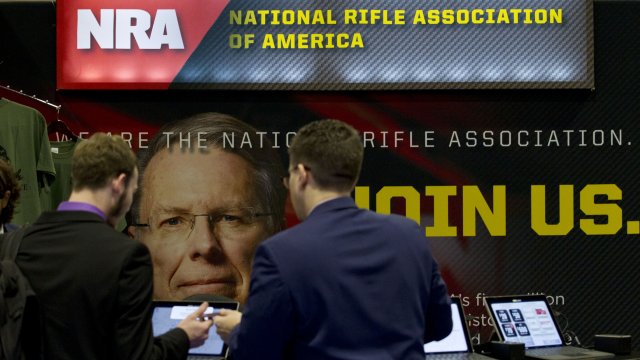 A lot has changed for the National Rifle Association since pouring millions into Donald Trump's successful 2016 campaign.

A bankruptcy filing, scandals and legal battles plaguing what has for decades been one of the most powerful forces in politics, have given gun control advocates renewed hope that something can get done in Congress.

"Our opponents are on their heels, the NRA declaring financial and, really, moral bankruptcy," Sen. Richard Blumenthal said during a recent congressional hearing on guns. "And we have, maybe most important, a powerful grassroots movement that has produced results at the polls, wins for members of Congress."

Just over four years ago, the NRA was among the nation's top outside political spending groups — endorsing Trump and putting nearly $55 million into the 2016 elections.

The rise of gun control groups ahead of the 2018 midterms resulted in the NRA being outspent by its opponents for the first time. It retook the spending advantage in 2020, but with a sum considerably smaller than that of four years earlier.

The NRA did not respond to Newsy's request for comment for this story. But even as the group's influence dwindles, the importance of protecting gun rights has not waned for many who make up the voting base of the Republican Party.

"Even with an organizationally weakened NRA, the massive level of support the NRA has built around gun rights still exists," said Matthew Lacombe, author of the new book "Firepower: How the NRA Turned Gun Owners Into a Political Force." "And so there still may be electoral consequences for Republicans for supporting gun control."

That means the biggest hurdle to any gun legislation still exists: getting Republican support.

Still, there may be room for optimism for gun control advocates, between the growth of outside groups countering the NRA's message as well questions about the Republican Party's future after Trump.

"I do think that there are more openings for gun control than in the past," Lacombe said. "I do think that the split that's occurred within the Republican Party between the sort of Trump wing and the non-Trump wing, if that split grows, it may provide some openings for some sort of moderate Republican members of the Senate to support gun control."