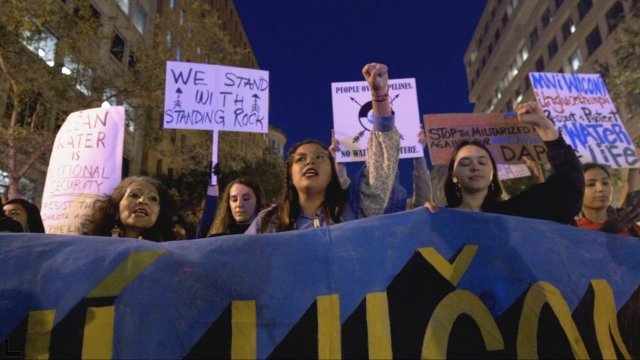 The First Amendment protects Americans' right to protest and the right to political dissent.

Newsy spoke to Gene Policinski of the First Amendment Center about the importance of the right to protest. Here's what he had to say.

"Under the first amendment, we have a right as Americans to protest. It's really in our DNA.

We need to let people know that dissent is not disloyalty. Dissent is part of our governing process. ... It will lead to changing minds for votes. It may lead to changes in policy. That is as protected as your right of freedom of religion or your right to speak.

Very often it's, 'I have a right to free speech. I'm not so sure about you because you're saying things I don't like.'

That's not how it works. It's a natural part of the American experience, unlike a lot of dictatorships —no dissent, no public demonstrations.

In America we prize protest. We are a nation of dissenters. They protected this right to get together as a group because that's really what they were doing when they started to object to the British rule of the United States.

The revolution didn't start with separation from England. It began with assembling to say to Parliament, 'You're not recognizing the rights you have granted us as a colony.' So they saw that ability to gather and protest as a core fundamental part of democracy. That's a non-violent protest.

That doesn't necessarily mean you're not going to break a law. As the Civil Rights protesters said, 'We have a right to march across the Edmund Pettus Bridge.'

The police said, 'No you don't.' There was a historic collision. The police may have had the law of the moment on their side in terms of how you assemble. But the protesters had the issues and touched the conscience of a nation. Everything changed.

People will try to restrain protests or try to restrain speech. Sometimes they'll try to do it on the basis of content. They just don't like what you are saying. But we have those core freedoms, including assembly, to say, 'Nope, sorry, you can't do that. This is America.'

You have a right to be heard. Even if it's in the manner of a street protest.

People equate dissent with disloyalty. They see a protest march, and it's the old 'America love it or leave it.' Why are you out here? And if you're an engaged citizen, you're drawn to join with others to make your voice heard."