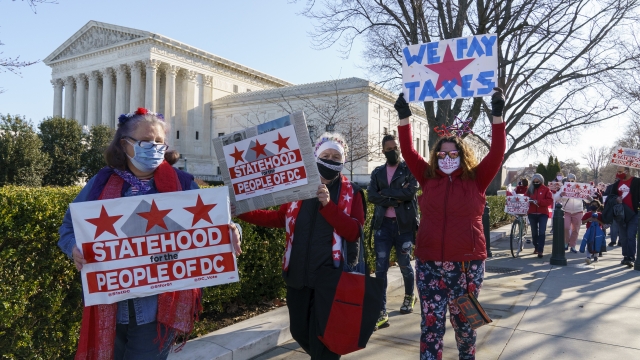 The fight for D.C. statehood has been going on for decades, but in 2021 the movement has reached a critical point.

Democrats control the House, Senate and White House, which has certainly happened before. But within the Democratic caucus on Capitol Hill, support for D.C. statehood is bigger than ever. The final holdout among the regional lawmakers: House Majority Leader Steny Hoyer.

"Even if you look at Steny Hoyer, you know, who's longtime progressive leader in the House, he and I, I think, were the last two in the regional delegation to come in favor of D.C. statehood. And I think we realize it comes down to basic fairness," said Democratic Sen. Mark Warner.

"I am able to do exactly what every member of the House of Representatives is able to do except cast that final vote on the House floor. That's why the most important thing the district would get would be two senators, because we have nobody over there," said Del. Eleanor Holmes Norton, who represents Washington, D.C.

The heart of the issue is voting representation in Congress. But statehood isn't the only way for the district's residents to get that.

"Another way that was almost successful happened in 1978. And that is Congress passed a D.C. voting rights amendment to the Constitution that would have treated D.C. as though it were a state for purposes of representation in Congress," said Derek Musgrove, an associate professor of history at the University of Maryland, Baltimore County.

Conservatives ultimately blocked that legislation before it was ratified.

Another option still talked about today is retrocession.

"If offered, I will vote to return residential portions of D.C. to Maryland, thus giving D.C. citizens the power to vote," said Republican Rep. Mo Brooks of Alabama.

But that's a lengthy process that doesn't have support from all the sides involved.

"The residents of Alexandria County petitioned to be retroceded back to Virginia. They succeeded in doing so in 1846. It's a very complicated process. You have to have a local vote supporting it. You have to get the state legislature to agree to accept the land back, and then you have to have Congress to vote to give the land back," said Musgrove.

Musgrove says statehood is the option with the most support among D.C. residents. But the nation's capital is reliably liberal, and Republicans argue statehood efforts are just a Democratic power grab.

"H.R. 51 is about one thing, and that's creating two new Democrat seats in the U.S. Senate to push forward a radical agenda that's been rejected by the American people," said Republican Rep. James Comer.

The House has passed H.R. 51, the D.C. statehood bill, but congresswoman Norton admits her bill faces an uphill battle in the Senate.

"The bill will probably not be supported by Republican senators because typically when a new state has come into the union, it has come in with a state of the opposite party. We don't have that situation here," said Norton.

"What do you see at the potential points of compromise for a D.C. statehood bill?" Newsy asked.

"That's a fair question. And it's one that I, I, you know, I don't have a great answer, because the idea that the notion is here, you know, in that you either -- it's kind of an all or nothing in terms of full representation," said Warner.