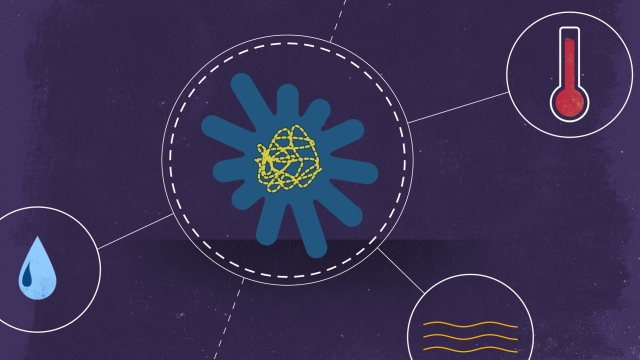 Everyone loves to talk about the weather, especially when they're counting on that weather to counter the spread of a pandemic.

"The virus survives better in cold or in drier environments and does less well in warmer and more humid environments," President Trump said earlier this year during a White House Coronavirus Task Force briefing.

In a March interview with "60 Minutes," Dr. Anthony Fauci, director of the National Institute of Allergy and Infectious Diseases and a top member of the White House coronavirus task force, said, "There's no guarantee that this particular coronavirus is gonna diminish when the weather gets warmer, but I hope it does."

After COVID-19 dominated the spring, many political and public health leaders hoped summer would put the breaks on the pandemic. But that's not what happened.

So why is that? And what role does the weather have in this pandemic?

The idea that summer would stop the outbreak — known as "seasonality" in the scientific community — is based on what we already know about other, more common, viruses.

"It's been known for, since medicine began, that epidemics are seasonal and viral diseases can be seasonal. I think it was first noted by Hippocrates that changes in the season change our outbreaks and the risk of disease and illness," explained Dr. Roger Shapiro, a professor of immunology and infectious diseases at Harvard School of Public Health.

To get a clearer idea of this theory, let's look at the seasonal flu.

At cold temperatures, this virus forms a rubbery outer coating that shields it as it travels from person to person. If it manages to reach the respiratory tract, this protective covering melts, like an m&m, basically. Now a liquid, the virus can enter a cell and infect it. But at high temperatures, the virus's outer layer breaks down — similar to how fat dissolves in heat — and deactivates the virus.

Dry conditions, meanwhile, cause viral droplets to shrink and evaporate into the air, where they may linger for hours. On surfaces, they can survive for up to 2 days. Humidity, on the other hand, causes them to swell. Eventually the droplets become too heavy to float and drop to the ground, unable to reach another human host.

"In the temperate climates, in warmer weather, in the summer, the temperature generally is higher and humidity is generally higher. And those two things independently tend to inactivate viruses," explained Dr. David Morens, a senior scientific advisor at the National Institute of Allergy and Infectious Diseases.

This phenomena was studied for over three decades by the CDC. It found U.S. flu activity peaked during the fall and winter.

Scientists can't say for sure that COVID-19 will act in the same way. At this point, it hasn't followed the pattern of seasonality, and that could be because it's a new virus.

"A brand new virus to which few people are immune can come and can spread at any time of year it wants to spread and it'll spread just fine," explained Morens. "It's only when you build up a certain amount of population immunity that that tap on the brakes in the summer has a more profound effect."

As of this writing, there have been close to 13 million cases of COVID-19 worldwide, and most of the world's population remains susceptible to infection.

Without widespread immunity, COVID-19 could become endemic — a disease that regularly comes back like the seasonal flu.

"In a few years from now, we may end up with a seasonal pattern with this virus, like we have with other coronaviruses and influenza. But right now, I wouldn't expect it in the first summer," said Shapiro.