Young Progressives Are Increasingly Critical Of Israel. Here's Why. 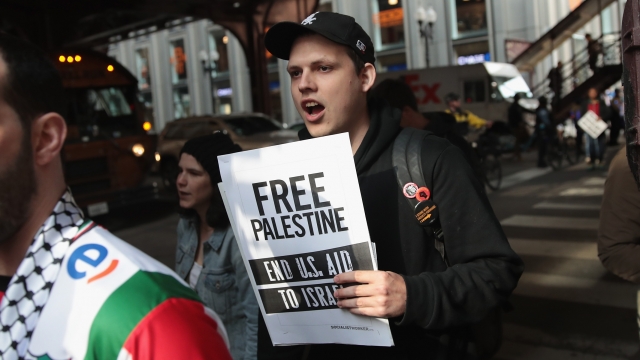 SMS
Young Progressives Are Increasingly Critical Of Israel. Here's Why.
By Ben Schamisso
By Ben Schamisso
April 8, 2019
Their criticism is rooted in issues that predate Netanyahu, but his relationship with President Trump, in part, seems to have accelerated the trend.
SHOW TRANSCRIPT

Young American progressives are increasingly openly critical of Israel — and the stance of some Democrats on the issue clearly reflects that trend.

"These 2020 Democrat contenders did not attend AIPAC. This after the progressive MoveOn.org demanded a boycott."

"A view that this needs to be a broader conversation that isn't just always defending Israel."

But what prompted this generational shift? And what could it mean for the future of U.S. foreign policy?

"Their grandparents never even mentioned the word 'Palestinian,' and now they take reality that there is or should be something called Palestine."

"A block that is a promoter of all sorts of policies and issues and values, which are against what many progressives are standing for."

Then, there's the fact that young progressives increasingly look at Israeli policies through a social justice lens. That's directly tied to the rising prominence of the boycott, divestment, and sanctions movement against Israel known as BDS. It aims to stop what it calls "Israel's violation of Palestinian human rights" through boycotts of brands and events associated with Israel. It also pressures international organizations to economically and culturally isolate Israel.

"BDS has been very successful, I think, in casting the question of Israel as one not of security, which was the primary lens in previous years in which Israel and pro-Israel parties could justify almost every action Israel took, especially versus the Palestinians. Many people around the world look at the situation and say, Israel is strong, it defends itself. It has one of the strongest armies in the Middle East. It has a high-income, first-world economy. And Palestinians' lives are getting worse and worse."

"BDS is saying we should call Israel apartheid what it is. ... All of those values totally resonate with the movement of African-Americans in the United States, for justice, for equality, for freedom from police brutality and arbitrary violence from the state, for real meaningful citizenship."

The Anti-Defamation League, a group that fights anti-Semitism, says the BDS movement's criticism of Israel is illegitimate because it rejects "Israel’s very existence as a Jewish state." That's an anti-Semitic concept, according to the ADL.

"Looking around the world, there are so many cases of injustice and human rights violations and oppression that those who criticize BDS say, why are you singling out Israel when there are so many other oppressors in the world? Is Israel being held to a different standard? And if it is being held to a different standard, why? Is that unfair? Is that symptomatic of some sort of anti-Semitism or anti-Jewish opinion?"

Twenty-six states have laws that prevent their local governments from doing business with organizations that boycott Israel. The ACLU is challenging these anti-boycott laws on the grounds that they violate free political speech.

"We should have an honest conversation about the U.S. role in enabling Israeli policies such as the settlement expansion, such as denial of Palestinian rights. It's not impossible to have an open conversation that is sensitive, but sensitive not only to the sensitivities of American Jews, but to American Muslims, to American Arabs, to people of all different faiths and backgrounds."

Finally, while criticism of Israel is often rooted in international law and human rights issues that long predate Israeli Prime Minister Benjamin Netanyahu, his right-leaning politics and relationship with President Trump seem to have accelerated the trend.

"These are two right-leaning politicians who are both embroiled in political scandals and corruption and legal investigations, who are helping each other out in moments of political need. That for sure does not sit well with many progressives. But I think it would be amiss to emphasize that at the expense of the real roots of what's going on: The stagnation on the ground in the Israeli-Palestinian conflict and no movement towards a just solution."

Now, could the American public's changing perception of Israel lead to concrete change on Capitol Hill? It might over time, but influential pro-Israel donors could also slow things way down.

"I think there's a question about whether politicians, in determining U.S. policy towards Israel, are answering to the preferences of voters, or are they answering to the pressures and preferences of donors? One of the best examples of that is on gun control, and that large numbers of Americans ... want greater gun control laws, and that doesn't translate into policy. We could very well see that gap on public opinion wanting a tougher U.S. stance in Israel, or withdrawal of U.S. military aid to Israel or greater U.S. pressure on Israel settlement expansion. I fear that we could see a gap between public opinion and policy for a long time. That's the nature of the political system we have, and how politics changes."