Why Our Food Has Fewer Nutrients Than Ever Before 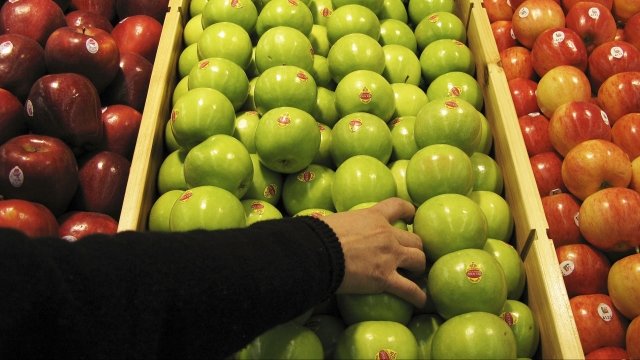 These agricultural issues could lead to even worse health outcomes than obesity.

Who hasn't dreamed of diving face-first into a giant cake or going nuts on a stack of pizzas?

That's basically what the world's bees are doing — and it could be leading to their sudden, massive disappearance. A scientist named Irakli Loladze has been trying to sound the alarm since the late 1990s, when he was a Ph.D. student in math.

Not many people listened until recently. The professor realized that as plants grow faster, their nutrients plunge and their carbs increase.

What makes plants grow? Carbon. This all goes back to climate change, he says. The climate warms as carbon is released into the atmosphere in the form of carbon dioxide.

Here's what happens next, according to Politico: "Rising CO2 revs up photosynthesis, the process that helps plants transform sunlight to food. This makes plants grow, but it also leads them to pack in more carbohydrates like glucose at the expense of other nutrients that we depend on, like protein, iron and zinc."

When animals, like bees, come along and munch on those plants, there's more to eat, and more sugar, but not as much nutrition. Humans depend on many of the same food sources, and scientists say the all-natural fruits and veggies we eat today aren't the same as the ones our parents grew up on.

WHO To Farmers: Stop Giving So Many Antibiotics To Healthy Animals

The World Health Organization released new recommendations on antibiotic use in food-producing animals.

According to Politico, "In 2004, a landmark study of fruits and vegetables found that everything from protein to calcium, iron and vitamin C had declined significantly across most garden crops since 1950." Initially, experts thought this had to do with the plants we were growing. Now, they suspect the environment plays a larger role.

Looking ahead as the Earth continues to warm, these agricultural effects could lead to even worse health outcomes than the growing obesity rates. The developing world could be devastated. A group of researchers put out their best estimates of what we could see in the year 2050.

It's startling. 150 million people could face protein deficiency, especially in countries with plant-heavy diets, like India and Bangladesh.

With zinc levels declining, 138 million moms and infants could be at risk of poor health. And thanks to a significant drop in dietary iron, 1 billion mothers and 354 million children could develop anemia, increasing their odds of serious illness or even death.