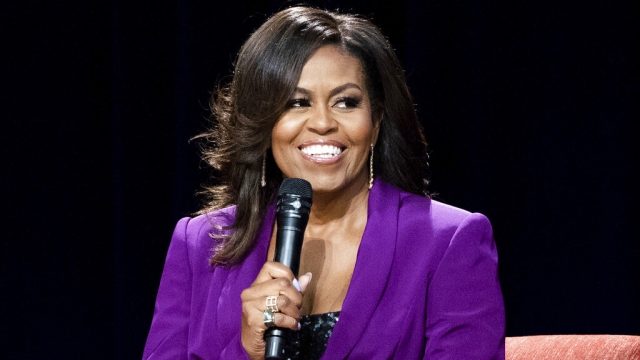 SMS
Why Michelle Obama's Mental Health Admission Is Important
By Amber Strong
By Amber Strong
August 11, 2020
According to the CDC, the percentage of Americans experiencing the symptoms of depression or anxiety has steadily increased throughout the shutdown.
SHOW TRANSCRIPT

Six months into a global pandemic, Americans are becoming more stressed. And as we've heard before, stress plays a big role in mental health.

"From May to July, it went from 39 percent to 53 percent of adults now saying that stress related to the pandemic had a negative impact on their mental health," said Lunna Lopes, a survey analyst at the Kaiser Family Foundation.

The CDC has also kept track with the percentage of Americans experiencing the symptoms of depression or anxiety steadily increasing throughout the COVID-19 shutdown.

One way to consider the mental and emotional toll of this pandemic? Think about how you felt at the start of the pandemic. How do you feel now?

As a country, we've found a way to cope with the stress, oftentimes with humor,  but the reality is a lot has happened in the last six months and that has taken a toll.

“What is going on in our country that couldn't affect someone's mental health?” asked Shainna Ali, a Mental Health Counselor and Advocate.

“Grief is a really big thing. And that can be grief, like somebody died grief, which is the typical way that we talk about grief. But that could also mean like loss of something you really wanted to do. So I really wanted to go on a vacation and I can't. That’s a grief,” said Jessi Gold, Assistant Professor, Department of Psychiatry, Washington University St. Louis.

68% saying stress has had a negative impact on their mental health, higher than any other race surveyed.

“If we couple sort of the current context of dealing with the pandemic, on top of dealing with racism, and these repeated exposures to these sort of incidents of police brutality, that all of those things can can cause significant toll on our functioning,” explained Erlanger Turner, Clinical Psychologist and Assistant Professor of Psychology  at Pepperdine University.

In a recent podcast, former first lady Michelle Obama says the actions of the current administration as well as racial strife in the country have led to ‘low grade depression.’

She copes by turning off the news for a while. Experts say that’s a good thing.

“For people that are sort of constantly getting inundated by some of these messages and videos that can be really triggering, I think it's important that you decide to step away and take a break,” suggested Turner.

But he says social media is still an important tool for showing the injustices to those who might otherwise refuse its existence.

Experts say Mrs. Obama’s admission is an important one, encouraging people, particularly African Americans, to seek help whether it’s an uptick in sadness from recent events or something prolonged like major depressive disorder.

“If we have a regulated system, no preexisting diagnoses and good coping, we can manage or buffer that stress. However, when they're multiple stressors at play, especially for a long time, that tends to wear on us,” explained Ali.

“There's never a wrong time to get help. So even if you feel like ‘low grade depression.’ You don't have to cross the threshold. And I think that's something we do mistake with mental health and physical health. We really wait for a crisis. And there is a crisis. It's called a pandemic,” said Gold.