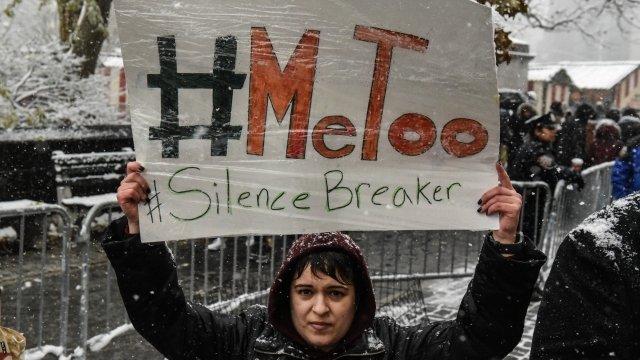 SMS
Why The #MeToo Movement Is Vital For Immigrant Workers
By Ben Schamisso
By Ben Schamisso
February 13, 2018
Work harassment is most common in the hospitality and food services industry, where women of color and immigrants are disproportionately represented.
SHOW TRANSCRIPT

Rocio is a Mexican immigrant who's lived in Chicago for 11 years and has worked night shifts as a hotel housekeeper for eight years.

"Oftentimes in bathrooms, male colleagues would come and would want to lock you in. Well, if not me, then my female colleagues," she said.

"They showed me a pornography video. But I first thought that they were showing a game or a joke on the internet, right? But when they told me, 'Come, look at this,' and they all laughed. When I understood, I didn't like it," she said.

On the job, Rocio said, female cleaners would repeatedly be harassed not just by male colleagues but also by customers. She only gave her first name to Newsy to avoid unwanted attention.

"Even customers, yes," she said. "They see that you're cleaning a bathroom and come in, like, 'Oh, no, don't mind me,' and right away, they take off their pants."

"I knew that it's frowned upon for a woman to work in hotels overnight. Many people think you're there to flirt, or I don't know. Men, in particular, they think that if you work at night, it's because you don't have a husband or a man to protect you and that you are alone," Rocio said.

While the #MeToo movement has taken the entertainment and political worlds by storm, the vast majority of workplace harassment claims actually come from low-wage workers, like Rocio, who receive little media attention. But for her, economic class doesn't matter when it comes to speaking up against harassment.

The Center for American Progress analyzed work harassment charges from 2005 to 2015. That group found sexual harassment is most common in the hospitality and food services industry, followed by retail trade, manufacturing, and health care and social assistance. And overall, a recent Quinnipiac University poll found, 60 percent of American women voters have experienced sexual harassment. Among them, 69 percent say they've experienced it at work.

"The onus has been on the workers themselves to have to enforce the laws, and that's what we do: We train workers to stand up and force their own rights," said Shelly Ruzicka. She's the communications director of Arise Chicago, a labor rights group that's helped Rocio and other immigrant workers report harassment incidents.

"Now, we need employers to take up that mantle and make sure that the law is enforced at their levels as well," Ruzicka said.

"Just like wage theft that happens mostly to people in low-wage jobs, sexual harassment is often happening at a very high rate to women of color and immigrant women, including European immigrant women, like our Polish members, too. They're often the most vulnerable and have a lot to lose, and it's difficult to speak up. Our society still puts shame and stigma on women for speaking up," Ruzicka added.

But to break that stigma, Rocio and a few other workers affiliated with Arise Chicago decided to say something. They crated an online video campaign, which aims to educate other Spanish-speaking workers on what to do in cases of sexual abuse on the job.

"It was very important to our members that other women that look like and sound like them would be able to watch this video and be able to identify," Ruzicka explained.

Rocio said there are a number of ways men can be supportive.

"I would like for people to pay more attention around them and stop saying that women are angry just because they're in a bad mood," Rocio said. "Women aren't angry for no reason. Husbands need to pay attention to their wives, too. We have to ask ourselves why this is happening and stop accepting it. Not anymore. Let's stop accepting something that should no longer exist."

"If this can change the whole world, then it's worth it," Rocio said. "And if not, at least we will be listened to, and people will know that we exist and that we're here."