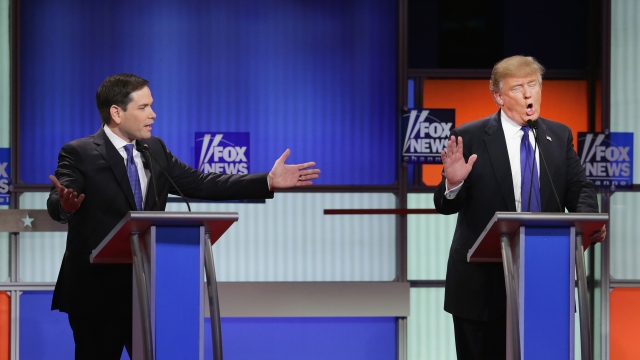 SMS
Why Marco Rubio Staying In The GOP Race Is Great For Donald Trump
By Grant Suneson
By Grant Suneson
March 6, 2016
Marco Rubio didn't fare well in voting last week, but he hasn't given up, which means the GOP establishment is still split between him and Ted Cruz.
SHOW TRANSCRIPT

The race for the GOP nomination has slowly been whittled down from a bloated field of more than a dozen to just four candidates. Now, front-runner Donald Trump says he's ready for a two-man showdown.

"I think Marco Rubio had a very, very bad night and personally I'd call for him to drop out of the race. ... I would love to take on Ted one-on-one. That would be so much fun," Trump said in Florida on Saturday.

But a two-man sparring match might not be as fun for Trump as he imagines. Exit polls reveal only 49 percent of Republican voters would be satisfied with Donald Trump as their nominee.

This means anti-Trump GOP voters could start to coalesce around Sen. Ted Cruz if Sen. Marco Rubio and Gov. John Kasich can’t build any momentum and are forced to drop out. Which, at this point, seems likely.

Rubio certainly struggled on Super Saturday, failing to get even 20 percent of the vote in any of the four states. Some analysts thought Rubio exchanging petty insults with Trump at the debate may have turned off a lot of voters.

As Cruz and Trump got two wins apiece, Rubio came in third in Kansas, Kentucky and Louisiana and finished fourth in Maine behind Kasich. But the weekend wasn't a complete loss for the Florida senator.

A Sunday win in Puerto Rico gives Rubio just his second victory after Minnesota and should keep his campaign afloat until he gets home to the Sunshine State.

Both Kasich and Rubio have been unwilling to quit with their respective home states of Ohio and Florida voting on March 15. But, if they can't win in their own backyards, Trump could soon get his wish of taking on Cruz one-on-one.

This video includes clips from Fox News, Ted Cruz and Marco Rubio for President and images from Getty Images.