Why Kerry Washington's New Movie Is Spooking Some Real Politicians 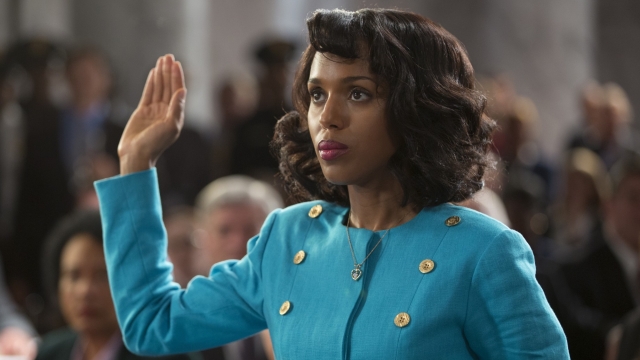 "During the fall of 1982, Judge Thomas began to use work situations to discuss sex. I could not keep silent," Kerry Washington said as Anita Hill in "Confirmation."

"On several occasions, Thomas told me graphically of his own sexual prowess. Because I was extremely uncomfortable talking about sex with him at all and particularly in such a graphic way, I told him I did not want to talk to him about these subjects," Hill told the Senate Judiciary Committee in 1991.

According to Politico, at least three of the people involved with the hearings are calling the movie biased, based on earlier drafts of the movie's script. Former Sens. Alan Simpson and Jack Danforth told Politico they're thinking of taking legal action if the actual movie stays close to the script they saw.

The third man, Mark Paoletta, a former White House lawyer, said the movie "takes some real facts, even some real testimony, and mixes it with lots of made-up dialogue and imaginary people — all with the intent of presenting the hearings in a very one-sided way. It is clearly not a fact-based film."

HBO has denied it's pushing an agenda. The president of HBO Films, Len Amato, added, "It’s not a documentary, so yes, some of the words aren’t going to be exact words said. Some characters might be composite characters, some time periods might be compressed."

The Hill hearing was a very public and detailed intersection of topics including sexual harassment in the workplace, race, gender and power, especially as a black woman was questioned by an all-white, all-male panel.

Some of the senators involved in the hearing, including Simpson, have been criticized for their treatment of Hill. A good portion of the blame has been put on then-Sen. Joe Biden, who was chairman of the Senate Judiciary Committee at the time.

Although he ended up voting against Justice Thomas, Biden has faced criticism that he mishandled the hearing and failed to call other witnesses that could back up Hill's claims.

Politico claims "there has been some concern from the Biden team about his portrayal," but so far the vice president hasn't publicly addressed the movie.

"Confirmation" premieres on HBO on April 16.

This video includes images from Getty Images and clips from HBO and C-SPAN.