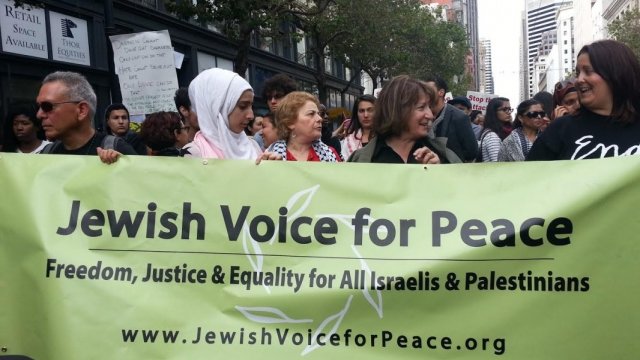 We've known since last March that Israel has its own travel ban. Now, we know precisely who that ban impacts.

The Israeli government released the names of 20 global organizations whose members will be barred from entering the country because they support BDS: the boycott, divestment, and sanctions movement against Israel that is led by Palestinians.

One group sticks out for being the only exclusively Jewish organization on the list. That's Jewish Voice for Peace, or JVP, a radical left-wing American organization that is pro-BDS. It aims to pressure Israel to reverse many of its long-standing policies affecting Palestinians by calling for cultural, economic and academic boycotts against it.

Like executives of the other organizations on the list, Rebecca Vilkomerson will soon be barred from the country. Her situation is complicated by the fact that her husband and children are Israeli.

"The democratic norms have eroded enormously in Israel. The understanding that there's suddenly a litmus test not just for other people but also for Jews about who can be involved is helping letting people see what's actually happening," she said.

The blacklist, which will take effect in March, applies to those who hold senior positions within the blacklisted groups. Five other American groups are on the list as well as organizations from Europe, Chile and South Africa. The ban is currently being challenged in courts on constitutional grounds.

Vilkomerson said: "If you think about the state that Israel is in right now, what is or looks like right now: an extremely right wing and extremely militaristic and extremely defensive frame and increasingly isolated from the world and responsible for human rights violations every day. It's not on a good trajectory. So my perspective with BDS is we can actually save this wrong, we can save the people of Israel by creating a place that's safe and it offers dignity and freedom."

Recent BDS actions include pressuring Lorde to cancel a scheduled concert in Tel Aviv and getting the newest Wonder Woman film banned in Lebanon, Tunisia and Qatar due to its Israeli lead actress, Gal Gadot. She served in the mandatory Israeli army and expressed her support for it in a 2014 Facebook post she has since deleted. BDS also calls for the boycott of a wide range of brands associated with Israel.

Explaining why he spearheaded the law behind the blacklist almost a year ago, the Israeli interior minister said of BDS supporters: "These people are trying to exploit our law and our hospitality to act against Israel and to defame our country. I will work against it in every way."

Israeli Ministry of Strategic Affairs added that the boycott organizations' goal is "to destroy Israel as a Jewish state" and that no other country "would allow visitors who come to harm the state to enter it."

The vast majority of American Jewish organizations strongly condemn the BDS movement. And the Anti-Defamation League has accused JVP of veering dangerously close to anti-Semitic slurs in its campaigns and of not distancing itself enough from anti-Semitic signs in protests it's co-sponsored. Vilkomerson disagrees.

"The BDS movement, the leadership, has been extremely clear and extremely principled in speaking out against antisemitism. So, I definitely would not judge the BDS movement by individual people who show up with signs," she said.

Yet even some who strongly oppose JVP and the BDS movement have come out against Israel's blacklist. The CEO of the American Jewish Committee, a staunch supporter of Israel, said:

"Every nation, of course, is entitled to regulate who can enter. Nevertheless, as history has amply shown throughout the democratic world, barring entry to otherwise qualified visitors on the basis of their political views will not by itself defeat BDS, nor will it help Israel’s image as the beacon of democracy in the Middle East."