Why Is This Madden NFL Video Game Character 14 Inches Tall? 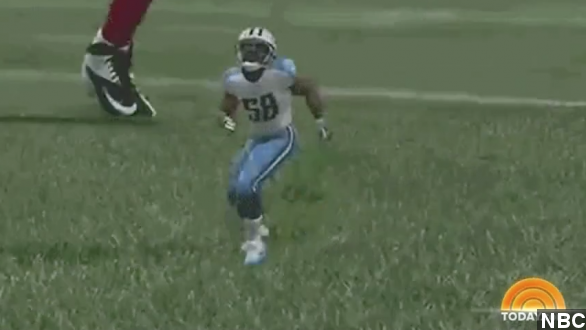 The newest Madden NFL video game has a few glitches, including a 14-inch player who's actually more than 6 feet tall in real life.

Gamers who got their hands on the newest "Madden NFL 15" game might be surprised to find a very tiny glitch during gameplay.

Tiny, indeed. A rather short, 1-foot-2-inch Tennessee Titans player graces the virtual field in what this Vine user calls the "best glitch ever."

The player, who has been dubbed the "Tiny Titan," has quickly made his rounds in the media.

YOUTUBE / SHAKE4NDBAKE: "He's also high-fiving with his teammates, getting him hyped up. Look at this little jump into a high five here."

"Go for the little guy."

The player is actually modeled after a much bigger Christian Kirksey, a linebacker for the Cleveland Browns who stands at 6 feet 2 inches and 233 pounds in real life.

Football fans on social media have also not been quiet about the awkward glitch — many users tweeting their own screen captures and poking a little fun about the whole thing.

Kirksey himself also found the glitch amusing, leaving fans on Twitter with this piece of wisdom: "No matter how small you are, have big dreams, and live big!"

But these glitches are not entirely uncommon and have happened before in the same game. Another glitch in the 2015 version of the game appears to show a player exploding.

"Why does that guy fly in the air? What?"

Another shows what looks like a player unexplainably hovering over the ground.

It's still not clear when a fix for these glitches will be released. "Madden 2015" is currently available for PlayStation and XBox users.