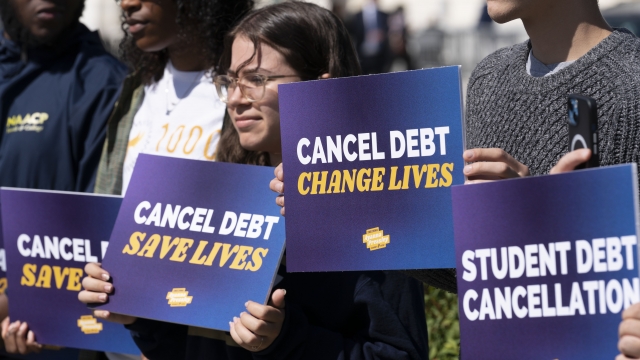 SMS
Why Is Student Loan Forgiveness Happening Now?
By Kellan Howell
By Kellan Howell
October 5, 2022
Many Americans have been asking for years for the government to cancel student loan debt, but why is it happening now?

A campaign promise is turning into reality.

"When I campaigned for president, I made a commitment that we provide student debt relief. And I'm honoring that commitment today," said President Joe Biden.

That is for now. Millions of Americans await the next steps to cancel at least $10,000 in student loan debt, and up to $20,000 for those who qualify. Yet leaders in nearly half the country, all Republican, want President Joe Biden to backtrack on his forgiveness pledge. They argue only a few will see the benefits, with even more feeling the burden.

"It's unfair for people who took other pathways in life that didn't require them to take out a lot of loans. They made those decisions to not have that debt and now the debt is being put on them," said Florida Governor Ron DeSantis.

So why forgive student debt now?

"The intent of the loan forgiveness package is to really support those in the middle class and help those who were struggling financially get back on their feet, post pandemic," said Miguel Cardona, the U.S. secretary of education.

The forgiveness comes at a time when inflation is near record highs, with soaring gas prices, increasing rents and housing costs, fueling economic uncertainty.

But the idea of forgiving student loan debt dates back to 2008. The Great Recession galvanized adults to return to school and gain new skills.

Simultaneously, the federal government made major cuts to higher education funding causing dozens of companies to leave the private student loan market. It ultimately prompted colleges and universities to raise tuition to make up for lost revenue.

Fast forward to 2022, where the average cost of college tuition and fees at public colleges has risen by over 179% over the last 20 years. And millions of Americans have turned to loans to offset tuition.

But some economists like Ken Troske from the University of Kentucky argue President Biden's plan only helps a small fraction of Americans relative to the overall economy and warns the move could further exacerbate inflation.

"For a lot of people, they've had their debt relieved, but immediately are they going to go out and spend a lot more money? Probably not. If they do, it's going to be spread over a long period of time, so it's hard to imagine it's going to have a huge impact on inflation anytime soon," said Troske.

As legal threats grow even louder from Republicans on the President's student relief plan, borrowers are left wondering when and if they will see some of that relief, while even more Americans wonder who will foot the bill for the billions of forgiven dollars.