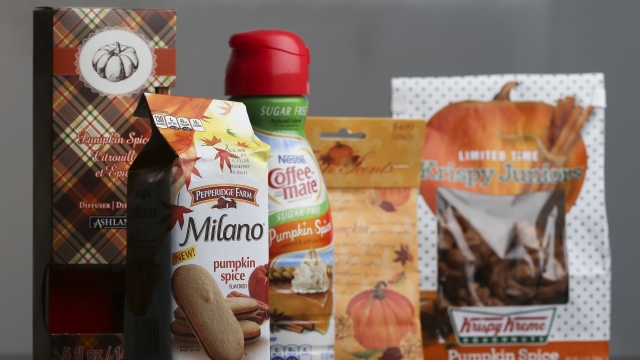 Fall is here and the pumpkin pie spice trend is once again taking over. But why is this season so popular?

Fall is a season of changing leaves, Halloween, Thanksgiving, and for many — pumpkin spice.

66% of consumers say pumpkin spice brings back warm, fuzzy feelings each year. You may think the pumpkin spice craze began with Starbucks, but this flavor has been associated with fall for centuries. The average pumpkin spice blend consists of cinnamon, nutmeg, ginger, cloves and allspice.

Early American settlers didn’t use the blend like we do today, but the same ingredients were used to preserve fall harvests of meat, fruit and vegetables.

That was until 1796 when Amelia Simmons penned a recipe using the spices in the first American cookbook.

Decades later McCormick bottled it up and made it "official" with the name "pumpkin pie spice."

It was an easy way to get all of the spices you needed for pumpkin pie, in one shake. Though surprisingly, there’s no actual pumpkin involved. By the early 90s, the blend made its way into people’s coffees.

But Starbucks was first to capitalize on the brew, by adding the pumpkin spice latte to its repertoire of seasonal drinks.

A Resurgence In Worker Empowerment

As Republicans gained power, a decades-long process of erosion of labor rights began. Union membership began to drop and has steadily declined since.

Peter Dukes, a Starbucks employee credited with the idea, pitched the combination in 2003, and the company has sold more than 420 million cups in the U.S. since.

So, why are people hooked on pumpkin spice anything? It’s mainly the smell.

Johns Hopkins University researchers say smells have the power to evoke memories. "We often long for the arrival of fall at the end of a hot summer, and our sense of smell can summon up the season early."

They say even reading the words pumpkin spice can spark cozy fall feelings, some of them so sweet folks will pay for it all year long.

Nielson and Forbes measured the pumpkin spice product market at $6.8 million in 2018.

Starbucks may have opened the floodgates in 2003, but the surplus of cookies, bread, drinks, and candles are all a clear sign that pumpkin spice is here to stay.