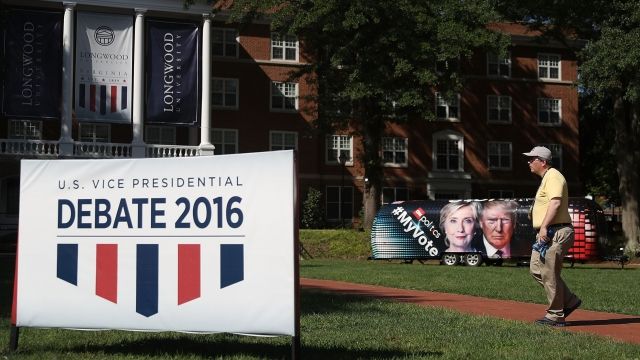 Question: What do Hempstead, New York; St. Louis, Missouri; and Las Vegas, Nevada, all have in common with Farmville, Virginia?

Never heard of Farmville? Most people probably hadn't until the Commission on Presidential Debates announced the vice presidential debate would be held there.

Tuesday night's matchup between Sen. Tim Kaine, who is also the former Virginia governor, and current Indiana Gov. Mike Pence will be held at Longwood University, a small liberal arts university of about 5,100 students.

But why Longwood and Farmville?

Farmville is a rural community of about 8,200 in the swing state of Virginia — so it has appeal to both tickets.

The town also has strong historical roots: The Civil War's Battle of High Bridge took place nearby. And it's home to what The Atlantic called "the forgotten school" in the Brown v. Board of Education case. Three-quarters of the plantiffs in that case were actually students at the nearby high school.

SEE MORE: It Turns Out Donald Trump Did Have Audio Issues At The Debate

USA Today reports one of the reasons Longwood got the honor was it promised to incorporate a debate-centered curriculum this semester. And apparently, it wasn't just one college course — the university created over 30.

The debate-hosting gig will likely pay off immensely for the university. According to Washingtonian, the school has received donations from about one thousand more donors this year compared to the same time last year.

The institution is also using the debate honor as an opportunity to draw in prospective students.