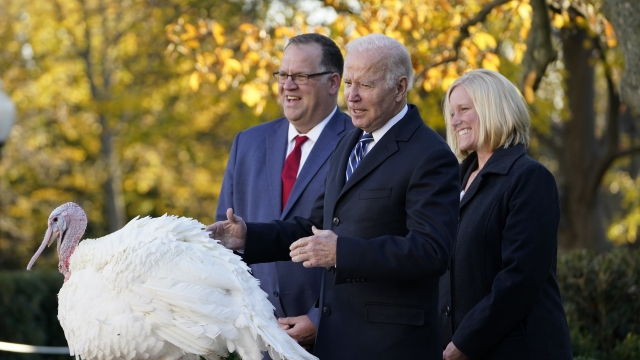 It's a centuries-old tradition with origins that are a little ... feathery. Some believe it started with Lincoln — not the president, but his son.

How does a turkey earn a pardon? Thanks to Bob’s Burgers we know there’s no crime involved. And the truth is, they don’t do anything to earn a pardon, except maybe make for a tasty holiday dinner.

Every year before Thanksgiving the White House holds a national turkey presentation, where the president grants clemency to one lucky gobbler.

It’s a centuries-old tradition with origins that are a little... feathery. Some believe it started with Lincoln – not the president, but his son. President Abraham Lincoln codified Thanksgiving in 1863, making it a national holiday set on the last day of November.

Later that year, the Lincolns were gifted a live turkey for Christmas. But the president’s youngest son, Tad, adopted the bird as a pet and named him Jack. Tad successfully urged his father to not turn Jack into a Christmas feast. Instead, President Lincoln granted the turkey a reprieve, the first of its kind. Gifting presidents Thanksgiving turkeys became a tradition soon after – spearheaded by Rhode Island poultry dealer, Horace Vose. Several others kept the new act of patriotism alive into the mid 1900s. But, this symbol of "cheer" didn’t last long.

In 1947 after receiving turkeys from the Poultry and Egg National Board and the National Turkey Federation, President Truman encouraged "poultryless Thursday" drawing outrage from the poultry industry, as three of the biggest upcoming holidays would fall on a Thursday.

The next year, Truman and the industry were back in good standing and the president was gifted two turkeys — which he ate.

In a 1963 article by The Washington Post, President Kennedy used the terms "pardon" and "reprieve" when declaring he’d let his gifted turkey live. Through the Nixon, Carter and Reagan administrations, sending the bird to farms became the norm.

And finally, in 1989, President George H.W. Bush made the longstanding turkey tradition official.

"But let me assure you, and this fine tom turkey, that he will not end up on anyone's dinner table. He's granted a presidential pardon," said Bush.

Please pass the red Jell-O stuffing! This map reveals some surprising differences in states' stuffing tastes (or dressing, if you live in the South).