Why Did World Leaders Choose Glasgow For Climate Conference? 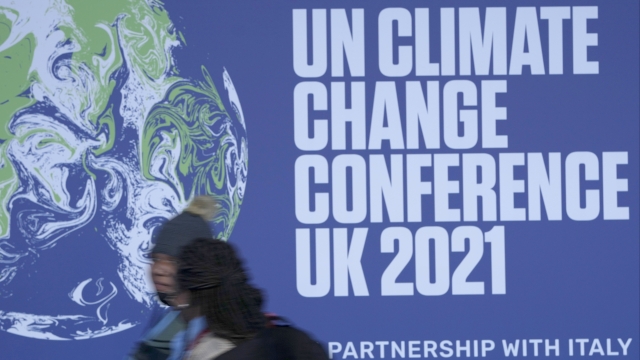 SMS
Why Did World Leaders Choose Glasgow For Climate Conference?
By Newsy Staff
By Newsy Staff
November 5, 2021
Glasgow's facilities and dedication to COP26's cause made it a prime spot for the global summit.
SHOW TRANSCRIPT

COP26 is an opportunity for world leaders to come up with solutions to the Earth's climate crisis.

The Earth's temperature is rising at a rate that will become irreversible unless bold action is taken.

He says the U.K.'s ambitious carbon emissions targets make it a suitable host for the summit.

"The U.K. has really been at the forefront of decarbonization and climate action, we we're one of the first countries to have a legally binding target to reach net-zero."

Firstly, it has a world-class events facility that can hold thousands of people, allowing experts the space to communicate the ideas for a carbon-free future.

Delegates from well over 100 countries gathered at Glasgow's Scottish Events Centre, just on the River Clyde.

But it's not just that. Many of its citizens and businesses are dedicated to fighting climate change, and it has multiple zero waste stores, as the city is dedicated to rebuilding the food retail industry.

Locavore, a company with multiple shops like that asks its customers to bring their own containers to minimize plastic waste. It also only invests in local produce, avoiding big potentially climate-damaging corporations. All of its produce is organic and ethically sourced, and importantly, it's proved popular with the locals, says the store's manager.

"We want just people to be really, really aware and conscious of where their food is coming from and the quality of that food, what's gone into it how it affects them and where their money's going," Manager Paul Faulkner said.

Innovative ideas like zero-waste stores have helped the city cut its carbon emissions by 41 percent between 2009 and 2019, and the Head of Sustainability at Glasgow City Council, Gavin Slater, says this summit is an opportunity to show off the ambitious city, as it aims to become carbon neutral by 2030.

"We've got great ambitions, but we've also got great character, and it's a wonderful city, and now we've got a great opportunity to show the world the endeavor that comes from Glasgow, the innovation and the expertise," Slater said. "It's been there at the right from the start of the industrial revolution, and now this new revolution towards a net-zero carbon future."

Experts say it's vital world leaders come up with solutions in Glasgow and take action. If not, time will run out to save the Earth.