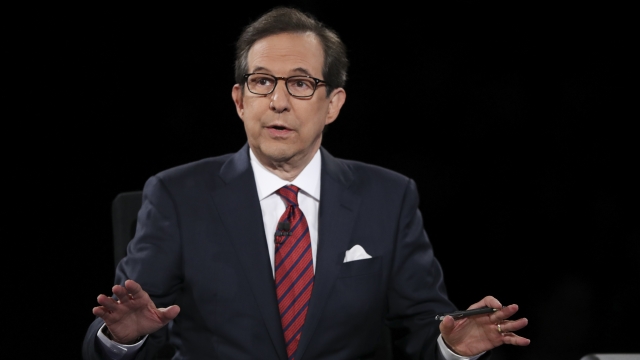 Chris Wallace is no stranger to presidential debates.

"I welcome you to the third and final of the 2016 presidential debates," the Fox News host said in kicking off the event.

In 2016, he pressed Hillary Clinton and then-candidate Donald Trump.

Trump responded, "I will look at it at the time."

Now, the veteran journalist and Fox News anchor will return to the stage once again, tapped by the Commission on Presidential Debates to serve as moderator of the first toe-to-toe between the president and former Vice President Joe Biden.

"The CPD uses three fundamental criteria to identify moderators," explained Peter Eyre, a senior advisor with the Commission on Presidential Debates: "Number one: Familiarly with the candidates and the major issues of the presidential campaign. Number two: Extensive experience in live television/broadcast news. And number three: An understanding that the debate should focus maximum time and attention on the candidates and their views."

The 72-year-old Wallace has earned a reputation for asking the tough questions — and his 2016 performance was widely praised.

"Mr. Vice president, I don't especially like asking you about this but it is an issue in the campaign and that has been your sometimes shaky performance on the campaign trail," Wallace asked Biden in a March interview on "Fox News Sunday."

"Since June it has gone up — more than doubled. One day this week 75,000 new cases. More than double," the journalist pointed out during a July interview with the president, referring to the coronavirus case numbers.

The president replied, "Chris, that's because we have great testing."

As the moderator, Wallace is also solely responsible for selecting the questions, which are not shared with either campaign or the debate commission ahead of time.

But he has revealed the candidates will debate six major topics, which include the Supreme Court, the integrity of the election and, of course, the pandemic.

Wallace has said he won't be fact-checking the candidates on stage, describing his moderator role as similar to that of a fly on the wall.

"My job is to be as invisible as possible," explained Wallace on Sunday. "I'm trying to get them to engage, to focus on the key issues."

"The minute the TV is off, there are going to be plenty of fact-checkers at every newspaper and every television station in the world. That's not the main role of our moderators," Frank Fahrenkopf Jr., chairman of the Commission on Presidential Debates, said Sunday in an interview with CNN.