Why Are Teachers Quitting? 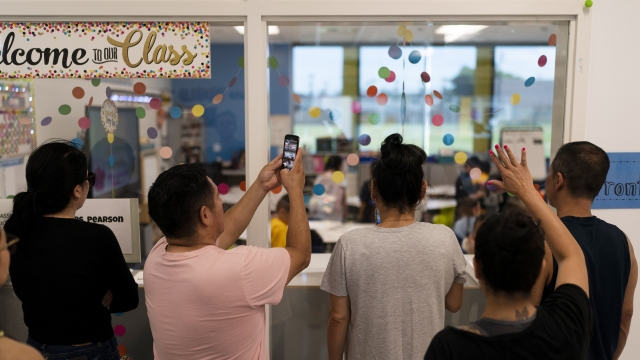 SMS
Why Are Teachers Quitting?
By Amber Strong
By Amber Strong
August 23, 2022
School districts across the country are facing teacher vacancies due to teachers quitting and leave the industry.

School bells are beginning to ring again, but coast-to coast teachers are leaving the industry in droves.

"Our educators are tired. They are stressed out and their workloads have significantly increased," said Madeline Balgavy, a former teacher.

A Wall Street Journal analysis of data from the Bureau of Labor Statistics found that as of last November, resignations in educational work — including teachers — grew faster than in any other industry.

The report also found 182,000 Americans quit their jobs in public education in February of just this year.

And districts are preparing for more vacancies heading into the new school year.

"When we look at 700+ vacancies within our school districts instructionally, we've got to be able to find solutions to win the talent war," said Addison Davis, the Hillsborough County Schools Superintendent.

According to the National Center for Education Statistics , 44% of public schools have teaching vacancies.

The Department of Education confirms the exodus is a result of the pandemic.

NCES Commissioner Peggy Carr says schools are forced to use more teachers and non-teaching staff outside of their intended duties to deal with shortages.

School district leaders Newsy spoke to say they have had to work around this practice.

"When we have classrooms that are unfilled that means we have teachers guest teaching on their planning time or we have principals or in some cases, central office administrators filling in in classrooms to help, so again the entire system feels that pressure," said Davis.

And the number of teacher absences was also up during the 2021-2022 school year.

Federal data shows nearly three-quarters of all public schools reported a spike in teachers calling out compared to prior years.

"It could be that if a colleague is out with COVID sometimes schools have to combine classes. Other times teachers have to give up planning periods," said Darrell Turner, a pre-school teacher.

The pandemic is the main reason Tara Roberts has left her job in special education.

"To walk away even when it's the right reasons and possibly admittedly maybe selfish reasons for your own health and well-being, both physically and mentally; you know it's the right thing to do but it's hard," said Roberts.

Roberts says her decision was based on a lack of support from her administration and feeling like student needs weren't being put first.

"When you just feel like what you do isn't valued and isn't respected and you're being degraded for it even within your own profession, those who can get out I think are getting out," said Roberts.

Educators say classroom conditions are one major factor behind the increase in departures.

Then there's the pay.

According to the National Education Association Labor Union, the average starting teacher salary for 2020-2021 was $41,770.

The NEA says that's a 4% decrease from the year prior when you factor in inflation.

"People say it all the time, teachers don't go into it for the money, and while that may be true, they also don't go into to live in poverty," said Spar.

Florida is one of the states with the lowest average salary overall for teacher pay. It's ranked 48th in the country, according to the NEA.

And the existing problem could get worse.

NEA polling from March found more than half of teachers plan to leave the profession, earlier than planned.

Randi Weingarten is the president of the American Federation Of Teachers.

And as uncertainty looms over the coming school year, teachers wait, ready to teach and ready to learn in what could be a year full of lessons outside the classroom.