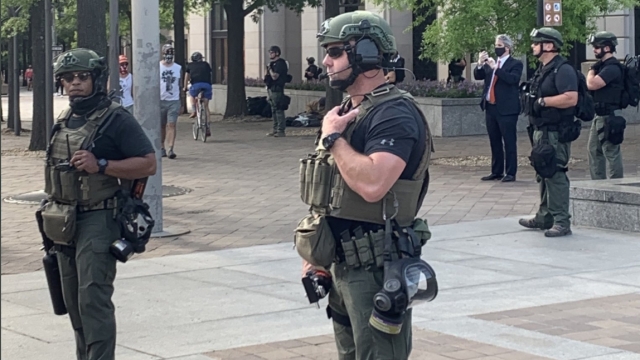 House Speaker Nancy Pelosi is demanding President Trump detail exactly which forces the federal government deployed to the city streets during a week of protests and occasional looting in the nation’s capital.

“Some without identification, others without justification,” Pelosi said during her weekly news conference. “What is the mission? Who is in charge? What is the chain of command?”

Some of the officers from the Bureau of Prisons could have been better identified, the agency’s chief conceded on Thursday.

“We normally operate within the confines of our institution. We don’t need to identify ourselves,” said Michael Carvajal, director of the Bureau of Prisons. “I probably should have done a better job of marking them nationally as the agency.”

There was no sign of unmarked federal officers during a walk around the expanded security perimeter of the White House on Thursday afternoon.

There were also National Guard soldiers, brought in from across the country.

Patches on their shoulders identified their branch of service and unit.

Officers from the Drug Enforcement Agency, an unusual presence on the streets of the city, patrolled with the agency’s named stamped on their backs.

The week’s earlier images of anonymous armed officers were still on the mind of the city’s mayor, Muriel Bowser.

She sent a letter to President Trump citing “unidentified federal personnel” among reasons she’d like troops and the extra federal officers to leave the city, no longer under a state of emergency.

President Trump answered with a pair of tweets calling the mayor "totally out of control," saying the National Guard "saved her from great embarrassment."

U.S. Attorney General William Barr directed the federal response to control the unrest that began in the wake of George Floyd’s death.

Barr said officers from the FBI, ATF and U.S. Marshals Service were also on the ground in a city where the federal government always has enormous power.

The show of force, Barr said, was to stop looting and violence.

“The Department of Justice is working to restore order in the District of Columbia and around the nation,” he said, adding that his officers were also there to defend the rights of the crowds.