Who Is Left Out Of President Biden's Student Loan Forgiveness Plan? 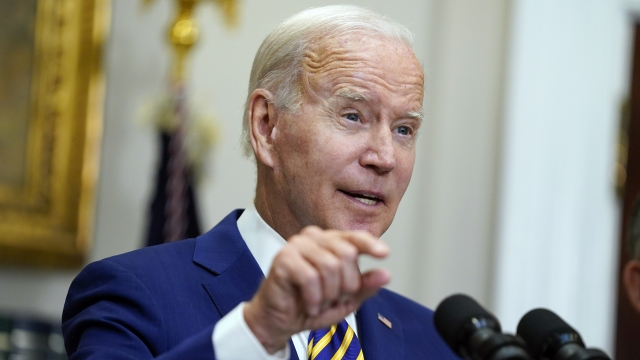 The president's loan forgiveness plan has hit speed bumps since its inception, with some people now finding out they're not included.

In August, President Joe Biden announced his plan to cancel debt for federal student loan borrowers. The plan includes up to $10,000 of forgiveness for people making under $125,000 a year and up to $20,000 for people with Pell Grants who meet those same income requirements.

But in the weeks following the White House rollout of the plan, there have been developments casting doubt on the idea of loan forgiveness, and that could take it off the table entirely for some borrowers.

Last week, a U.S. appeals court pressed pause on the plan, holding up any debt relief until judges can weigh whether it's constitutional.

But even if President Biden's forgiveness moves forward at all, some of the people who thought they'd be eligible for forgiveness have found out they were no longer included. This is for anyone who has Perkins Loans and Federal Family Education Loans, also known as FFEL.

FFEL was once a big part of the federal student loan program, but FFEL ended in 2010. Data shows that 4 million borrowers have this type of loan. These loans are managed by private banks but guaranteed by the federal government.

Those with Perkins Loans or loans through the FFEL program had to consolidate their loans into the federal Direct Loan program before Sept. 29 of this year if they wanted forgiveness. If they didn't do that, it's too late.

Experts think the change has something to do with pushback President Biden's plan received from several states before the appeals court blocked the plan.

"Six state attorney generals filed a lawsuit trying to block the president's plan where they said that their states would be hurt because when a borrower consolidates a thug loan into the direct loan program," said Mark Kantrowitz, student loan expert. "The state loan program loses that loan, so they lose the interest revenue and servicing fees associated with that law."

Cybersecurity experts told Newsy the relief program is particularly lucrative to scammers because it offers a huge target for information and money.

The administration says about 800,000 borrowers are now excluded from relief. There are about 1.5 million FFEL borrowers who also have federal direct loans that still qualify for forgiveness, so they'll get partial forgiveness.

"In total, more than 40 million Americans can stand to benefit from this relief, and about 90%, 90% of that relief is going to go to people making less than $75,000 a year," President Biden said. "Let me be clear: Not a dime will go to those in the top 5% of the income bracket. Period."

For those who do qualify, President Biden recently launched the student loan forgiveness application. It's pretty simple and quick, with users just needing to input their name, birthday and Social Security number.

The site's launch kicked off with a beta testing period, with the official site launching a few days later. Kantrowitz says those who applied during the testing period will still have their application processed and will be first in line for forgiveness.

"After they confirm your eligibility, they will send you email saying that they've confirmed your eligibility, and then they'll start the process of providing you with that loan forgiveness," Kantrowitz said. "Your loan servicer will notify you when the forgiveness has been applied to your loans. They will tell you what your new loan balance is or if your loans have been paid off in full. And also, if you have a remaining balance, they will tell you what your monthly payment will be starting in January of 2023 when repayment restarts."

Kantrowitz urges borrowers to apply for forgiveness immediately, even with the current court challenge holding up President Biden's plan.

"This is a one-time event," Kantrowitz said. "It does not mean that there will be any loan forgiveness like this in the future. If Republicans take over control of the House and the Senate some future point, they might pass legislation to outlaw this sort of thing. The president doesn't actually have the legal authority to do this, but the Republicans who oppose it have been having trouble finding anyone with legal standing to bring a lawsuit to prevent it."