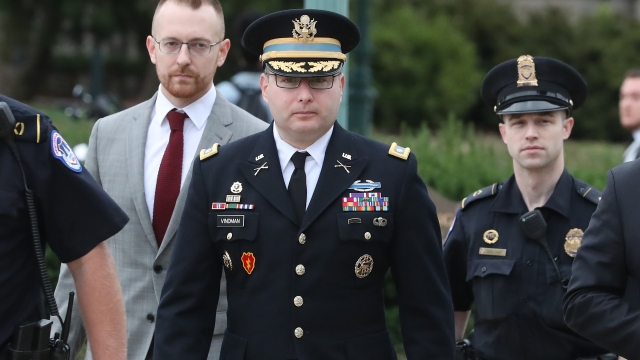 Lt. Col. Alexander Vindman is one of the eight witnesses scheduled to testify during the second week of public impeachment hearings.

The hearings will take place over three days. Vindman is set to testify Tuesday morning. But before the impeachment inquiry, he wasn't exactly a household name. Here's a look at his background:

He fled Ukraine and came to the U.S. when he was 3 years old with his brothers, father and grandmother. He and his twin brother later enlisted in the U.S. Army and started careers in government. Right now, he's the top Ukraine expert on the White House's National Security Council.

Earlier this month, House investigators released the transcript of Vindman's closed-door testimony. He told lawmakers "there was no doubt" about what President Trump was asking for during the call. He also said he was concerned about the call and "immediately" reported his concerns to National Security Council's lawyer.

Vindman also told lawmakers about a July 10 meeting where U.S. Ambassador to the European Union Gordan Sondland asked Ukrainian officials to investigate the Bidens in order to secure a meeting with President Trump.