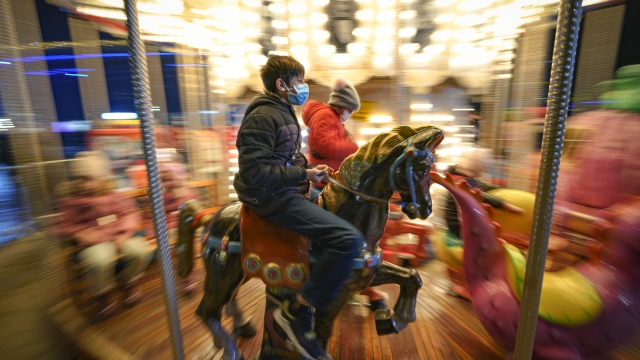 The World Health Organization's office for Europe said Tuesday that children in the 5 to 14 age group now account for the highest rates of reported COVID-19 infection in the region.

WHO Europe regional director Dr. Hans Kluge also argued that vaccine mandates should be "an absolute last resort," and said that COVID-19 deaths remain "significantly below previous peaks." But he said that coronavirus cases and deaths have more than doubled in the last two months in the 53-country region stretching to central Asia.

He stressed the continued threat from the widespread Delta variant, and noted the new Omicron variant has so far accounted for 432 confirmed cases in 21 countries in the region.

"The Delta variant remains dominant across Europe and Central Asia, and we know that the COVID-19 vaccines remain effective in reducing severe disease and deaths from it," he told reporters from WHO Europe headquarters in Copenhagen, Denmark. "It is yet to be seen how and whether the latest COVID-19 variant of concern, Omicron, will be more transmissible, or more or less severe."

Kluge urged countries to "protect children and the schools" amid the rapid increase in cases among the young in the region, and said the incidence of COVID-19 was two to three times higher among young children than the average population in some places. Children have tended to face less severe cases than more vulnerable populations like older people, health care workers and people with weaker immune systems.

"As school holidays approach, we must also acknowledge that children contaminate their parents and grandparents at home, with a 10 times increased risk for these adults to develop severe disease, be hospitalized or die when non-vaccinated," he said. "The health risks extend beyond the children themselves."

Kluge also spoke out against vaccination mandates, saying they should be an "absolute last resort" and have efficacy only in some contexts.

WHO's European region has the global epicenter of the pandemic for weeks, accounting for 70% of cases and 61 percent of deaths worldwide according to the U.N. health agency's weekly epidemiological report issued last week.