Yes, White Nationalism Is On The Rise — At Least In The US 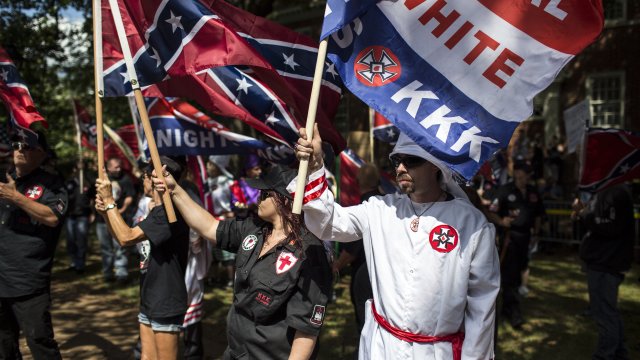 SMS
Yes, White Nationalism Is On The Rise — At Least In The US

By Ben Schamisso
March 18, 2019
President Trump was hesitant to link the New Zealand attacks to a global rise in white nationalism. But data shows it's growing, at least in the U.S.
SHOW TRANSCRIPT

In the wake of the mosque shootings in New Zealand that left at least 50 people dead, a reporter asked President Donald Trump whether he thought white nationalism is a rising threat worldwide.

Trump: "I don't agree, really. I think it is a small group of people that have very, very serious problems."

The president has expressed sympathy for the victims, but he's also said he didn't have enough information to link the New Zealand attacks to a larger trend.

Now, the president was answering a question about white nationalism on a global scale. But data from several civil groups shows white supremacy is clearly on the rise in the U.S.

The Anti-Defamation League, a group that tracks extremism, reports white supremacists in the U.S. "dramatically stepped up their propaganda efforts" in 2018 compared to the previous year.

The ADL also calculates that white supremacists murdered 39 people in 2018 — more than twice as many as in the year before.

ADL's Marilyn Mayo: "There is a lot more anger, a lot more polarization, a lot more fear around changing demographics, around immigration issues .... There's a sense — certainly in the United States — that within the next couple of decades, whites will be in a minority in this country, and that is something that fuels white supremacists. And we saw that in New Zealand, of course."

The Southern Poverty Law Center, another organization that tracks hate groups, seems to confirm that white supremacy is on the rise.

It reports the number of white nationalist organizations in the U.S. surged by almost 50 percent in 2018.

The SPLC says these groups are "electrified by Trump's presidency." But it's important to note that the recent rise of white nationalism in the U.S. predates the current president.

Over the last decade, white supremacists have been responsible for more than half of all extremist-related killings in the U.S., according to ADL data.

And 10 years ago, an internal government report mentioned a rise in right-wing extremism in connection with the election of President Barack Obama.

While data and statistics are always open to interpretation, the overarching conclusion is that white nationalism is a clear threat in the U.S.

ADL's Marilyn Mayo: "Extremism has always existed, but there is a way of amplifying it, of getting it out there in the world, that we didn't really have before. And I also think that what we are seeing very clearly is the internationalization of white supremacy, where white supremacists are influencing each other all over the world with their activities."

The ADL says that it's crucial for law enforcement to move away from what it calls the "disproportionate attention on the threat of Islamist extremism" and toward a stronger recognition of the far-right extremism threat.

To do that, the organization recommends law enforcement get better training "on best practices to combat domestic terrorism," as well as more resources to respond to and prevent far-right radicalization.

ADL's Marilyn Mayo: "You may not be able to stop everything, but there has to be a way of trying to stop the kind of hatred that we're seeing being spread online that's, again, motivating people to move from online to actual violent action."