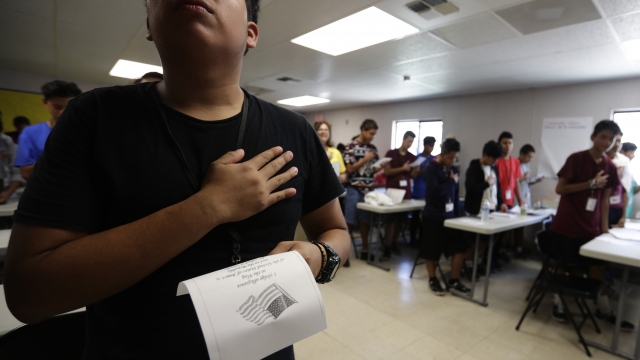 “There are very few good options here, and we chose the one we thought was best.”

The Biden administration has reopened a Trump-era facility to shelter up to 700 migrant children ranging in age from 13 to 17.

But the facilities are designed to look different than how you remember them.

“This facility in Texas, which has been reopened, has been revamped. ... There are teachers, there is medical facilities.”

The Biden administration says minors need their own facilities and doesn’t want to send them back home or to foster homes without proper vetting. The policy is in line with the Flores Agreement, which established a nationwide rule for how to detain minors in immigration custody.

Here’s how it works:

Customs and Border Protection agents apprehend migrant children, usually at the border. Five thousand seven hundred were taken into custody in January, the highest total for that month in recent years.

The children are taken to a facility run by Customs and Border Protection. These were the sites of the now infamous  pictures dubbed “kids in cages.” Per that agreement, they aren’t supposed to be held there for more than 72 hours. But CBP admits some of the 700 kids and teens now in its custody have been held longer.

"There were some delays last week because of weather and because some of these facilities to safely move these kids to did not have power. So some, unfortunately, did stay four days, five days or longer, but the objective is to move them as quickly as possible to the HHS sponsored facilities."

So what happens next? Children are placed into facilities run by Health and Human Services, like the Trump-era facility in Carrizo Springs, Texas -- the shelter the Biden administration is reopening.

It’s meant to be a short-term spot, with doctors and teachers, before children are matched with families or sponsors.

“What we are not doing, what the last administration did, was separate those kids, rip them from the arms of their parents at the border. We are not doing that. That is immoral. And that is not the approach of this administration," said press secretary Jen Psaki.

And while the Biden administration tries to distance itself from its predecessor, there’s skepticism.

Like the senior advocacy and policy counsel for the ACLU saying “it is critical that it not repeat the mistakes of the Trump administration.”

"This is not OK, never has been OK, never will be OK no matter the administration or party."