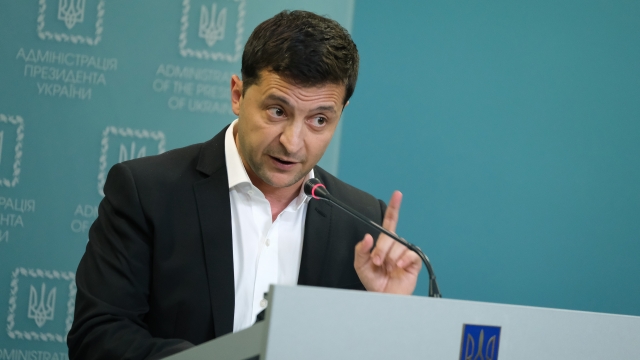 SMS
White House Releases Memo Of First Call Between Trump And Zelenskyy
By Meg Hilling
By Meg Hilling
November 15, 2019
The memo from the April 21 conversation was released just moments before public hearings in the impeachment inquiry resumed Friday.
SHOW TRANSCRIPT

The White House released a memo of the first phone conversation between President Trump and Ukrainian President Volodymyr Zelenskyy Friday.

The memo was released only moments before the House resumed public hearings in the impeachment inquiry.

In the April 21 call, President Trump congratulates Zelenskyy on his election win, saying, "I have many friends in Ukraine who know you and like you."

Both men go on to compliment one another on their leadership, as well as indicate interest in working together in the future. President Trump said, "We'll have a lot of things to talk about, but we're with you all the way."

It's important to note that this memo is just that. It's not a word-for-word transcript. The document itself says it is not verbatim, but notes and recollections of Situation Room and National Security Council staffers assigned to listen and memorialize the conversation in written form.

White House officials debated whether to release the memo after President Trump mentioned the possibility in September. He insisted that making it public would reinforce his innocence in his dealings with Ukraine.