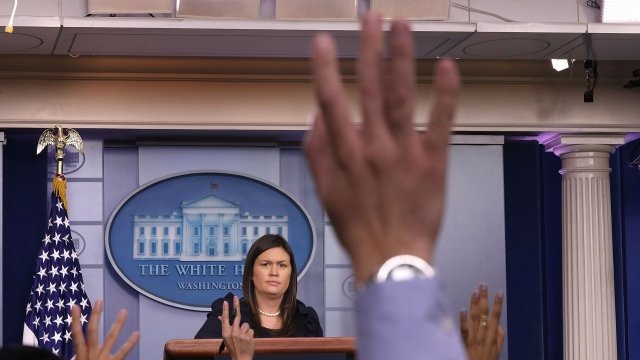 White House press secretary Sarah Sanders downplayed the significance of two separate court filings released Friday about President Donald Trump's longtime allies. She then blamed the media for "trying to create a story where there isn't one." That's according to the Associated Press.

Special counsel Robert Mueller accused the president's former campaign chairman Paul Manafort of trying to contact an administration official as recently as May and then lying about it. In one of the Friday court filings, Mueller details five topics he says Manafort lied about, breaching a plea agreement Manafort accepted in September.

The other court filing in the Southern District of New York recommended Trump's former attorney Michael Cohen serve jail time ranging from 51 to 63 months. And federal prosecutors took into consideration Cohen's cooperation with the Mueller investigation when they made that recommendation. Cohen pleaded guilty to several counts of tax fraud and campaign finance fraud earlier this year.

As far as the president's role, the Washington Post reports the court filings revealed new Russian ties to the president's inner circle and also implicated the president in planning to buy the silence of women who may claim they had an affair with Trump.

The White House claimed the new filings associated with Manafort say "absolutely nothing about the President." And the filings regarding Cohen "tell us nothing of value that wasn't already known."

Shortly after this news broke Friday, Trump tweeted about himself in third person saying, "Totally clears the President. Thank you!"