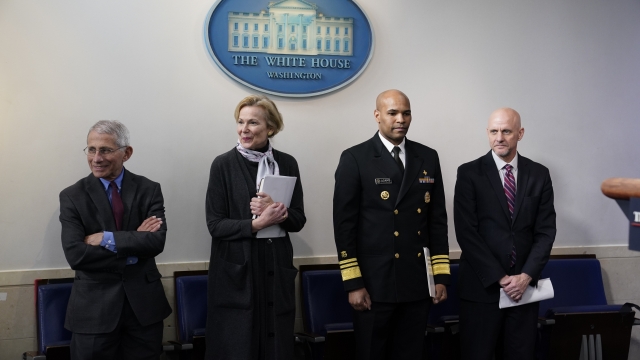 SMS
White House Coronavirus Task Force To Shift Focus To Economy, Vaccines
By LeeAnne Lowry
By LeeAnne Lowry
May 6, 2020
Officials from the "phase one" task force may be added or removed.
SHOW TRANSCRIPT

President Donald Trump tweeted on Wednesday that the White House's coronavirus task force will continue "indefinitely." But it will shift its focus from medical resources to vaccines, therapeutics and reopening the country.

Vice President Mike Pence had told reporters the day before that the task force would wind down by late May or early June. The president indicated then that he'd put together a "phase two" task force:

"Mike Pence and the task force have done a great job, but we're now looking at a little bit of a different form, and that form is safety and opening, and we'll have a different group probably set up for that."

The president said Wednesday it will be the same task force with officials added or removed.

President Trump has stressed prioritizing the economy recently, saying: "The people of our country should think of themselves as warriors. We have to open." He's acknowledged that reopening the country will harm some Americans.