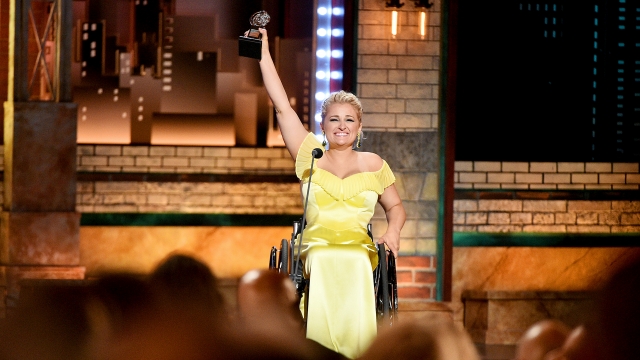 "Hadestown" was the night's big winner at the 2019 Tony Awards on Sunday.  But it was a groundbreaking win for a cast member of "Oklahoma!" that stole the show.

Ali Stroker picked up the trophy for best featured actress for her portrayal of Ado Annie in the reimagined revival of the beloved Rodgers and Hammerstein musical. Stroker is the first performer in a wheelchair to ever win a Tony Award.

The New York Times pointed out that the award show's producers did not make the stage at Radio City Music Hall wheelchair-accessible from the audience's seats. So it was probably more than just a coincidence that Stroker was already backstage when her category was announced, since she'd just finished performing a number from "Oklahoma!"

While speaking to reporters after her win, Stroker talked about the need for better accessibility backstage in theaters for Broadway performers with disabilities.

Stroker previously became the first wheelchair-using actor to perform on a Broadway stage when she appeared in a revival of "Spring Awakening" in 2015.