What's Next For Vice President Pence? 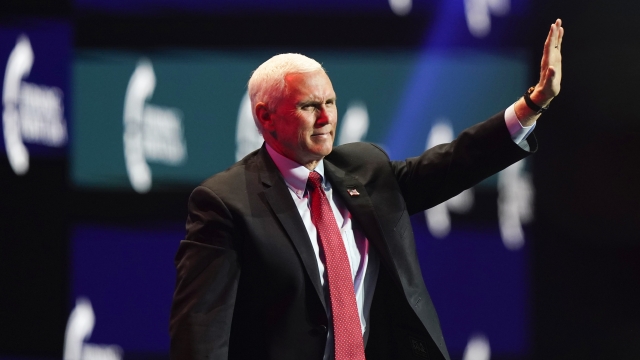 Jan. 6 will be a bit of an awkward moment for Vice President Mike Pence when he presides over a joint session of Congress to count the Electoral College votes. But it’s something both Joe Biden and Al Gore did after their parties lost the White House.

In this case, questions still remain about Vice President Pence’s plans to run for higher office.

"Since we don't know yet if Donald Trump is going to run again in 2024, his future is maybe more up in the air than most," said Andrew Downs, who is the director of the Mike Downs Center for Indiana Politics at Purdue University Fort Wayne.

The vice president has been a loyal supporter of President Donald Trump for the past four years. But where that loyalty will take him next remains unclear as his outgoing boss continues to weigh his own political future.

"I bring greetings from the 45th president of the United States of America, President Donald Trump," Vice President Pence said.

For many, the vice presidency is a pathway for a run for the White House. And Pence’s resume would give him an edge over potential rivals if he does decide to run.

Pence has remained quiet about his future ambitions and perhaps a more pressing matter for the soon to be former vice president is finding a place to live and a job. The vice president and Karen Pence lived in the governor's mansion in Indiana before moving into the vice presidential residence in 2017. Pence and his family could return back home to the Hoosier State.

"Obviously, he can get on the speaking circuit, and he'll get paid pretty good money to do that," Downs said. "But he'll also probably be looking for some other kind of employment. One of the things that people talk about is maybe serving on a board of directors that has some kind of compensation, or maybe a few of those."

Republicans say speaking tours are just one way Pence can maintain and grow his base.

"My advice to Vice President Pence, and my advice to, I think, every Republican who thinks their name is going to be on the ballot sometime in the next two to four years, would be to make a concerted, intentional effort to start talking to hardworking Americans every day who find themselves literally locked out of the workforce," said Joseph Pinion.

Republican donor and Trump supporter Dan Eberhart told Newsy that he thinks Vice President Mike Pence is interested in a White House run in 2024, but that he will have to fight off several other contenders if President Trump decides against running. And there's no guarantee that he will receive the support of the president or his loyal base of followers.