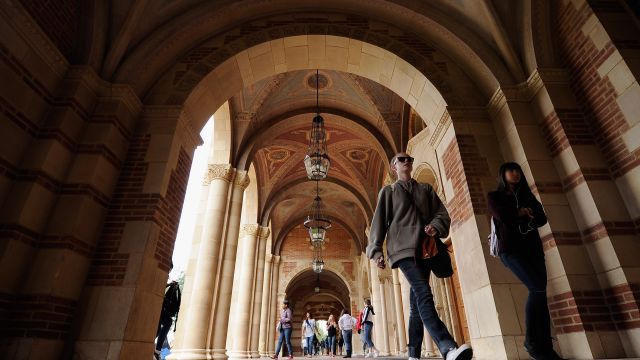 The victim, engineering professor William Klug, was a father of two.

Two men who were found dead on UCLA's campus Wednesday in what police believe was a murder-suicide have now been identified.

The campus was locked down after a shooting was reported at a UCLA engineering building and local and federal authorities arrived on campus to search for a possibly active gunman.

Authorities say Sarkar shot and killed William Klug, a mechanical and aerospace engineering professor, who had been one of his teachers. The two reportedly had a strained relationship.

LAPD Chief Charlie Beck told KTLA a "kill list" was discovered at Sarkar's house in Minnesota. Klug's name was reportedly on the list, as well as another UCLA professor who was unharmed.

Beck said a third name was on the list — an unidentified woman in Minnesota whom police found dead in her home.

Klug's friends have set up a GoFundMe account for his family. He was a father of two children and volunteered as a Little League coach.

"It's hard to even fathom it. To have your — excuse me — to have your son grow up without a dad is rough," Lance Giroux, a friend of Klug's, told KNBC.

Most UCLA classes resumed Thursday, but engineering classes have been canceled for the remainder of the week. Students take their finals next week.

Besides reviewing security measures, UCLA's provost said the university is looking at its classroom doors that open outward. These doors couldn't be locked Wednesday when students attempted to barricade themselves.

This video includes clips from KABC and images from Twitter and Getty Images.