What We Can Learn From Listening To Iran's Protest Slogans 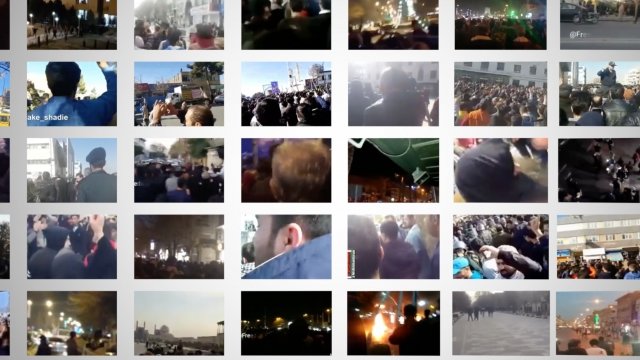 Newsy analyzed footage and slogans from dozens of Iranian protest videos to better understand why people were demonstrating.

In just a few weeks, protests have swept across Iran. Some in the streets chant death to the country's president and, perhaps more surprisingly, to its supreme leader. The words are important. Listen, and they reveal what the protests are about and what the people want. So we scoured dozens of videos from the protests' first three days to translate and analyze those chants — to see to what the words reveal.

Protests first broke out at Shohada Square in Iran's second-largest city, Mashhad. These slogans were political and economic. Protesters spoke against Iran's President Hassan Rouhani. Similar chants were heard in the nearby city of Neyshabur.

Some reports suggest Rouhani's opponents prompted the initial protest in Mashhad. The protests spread and so did the people's grievances.

"Many who protested wanted a better life. But almost all who protested believed that their basic rights were not being met." — Behnam Ben Taleblu

On the second day, protests grew from four cities in Iran's east to at least 16 throughout the country. Chants against Rouhani continued, but videos from the second day showed protesters were now also speaking out against the country's religious elite, including Supreme Leader Ali Khamenei.

"The significance of targeting Iran's supreme leaders is at once religious and political. Saying, 'Syed Ali has to go,' is a way to address him with his first name, his short name, without invoking his new rank or his newly promoted rank and that could be considered a slur or an insult. But the targeting of the supreme leader in particular shows that the grievances are not limited to the administration, it's limited to governing apparatus of the country," Behnam Ben Taleblu said.

Some protesters were even calling back to the days of the Shah of Iran, before the Islamic Revolution in 1979.

President Trump is waiving sanctions to keep the Iran deal afloat — but says this is the last time he's doing so.

"Slogans like, 'Bless your soul, Reza Shah,' invoke that legacy of Iranian state that was anti-clerical, that was highly nationalistic and that extolled its Persian culture over its Islamic heritage. With almost 40 years under the Islamic Republic, I think we know which side of the scale the Iranian people are more leaning towards now than ever before," Ben Taleblu said.

By the third day, protests reached even more cities — including the streets of the capital, Tehran. Criticism of Iran's presence in Syria, Lebanon and Gaza was one of the most common slogans.

Protests were now aimed against the Islamic Republic's government as a whole and had spread countrywide.

"In quality social science, correlation does not mean causation. It's important to note that there are in fact some overarching themes from town to city to village to the country's capital if you look at the protest slogans, in particular the politically charged protest slogans that targeted not an administration or not a government or not a political policy but the entirety of the regime. I think the overarching message here is that the Iranian people want an Iranian government that puts their interests first," Ben Taleblu said.

By the third day of protests, we found videos showing demonstrations reached at least 25 cities. Dozens more would see demonstrations by mid-January. And that's one of the most notable aspects. Previous demonstrations in 2009 were much larger in size but mainly played out just in Tehran.

And a lot of people are drawing different conclusions from these new protests in Iran. But the demonstrations' spontaneity and lack of clear leadership makes it really difficult to attribute one cause. What we can tell from the chants on the street is many Iranians are tired of the path their government has taken. And they want a change — or more unrest could be on the way.