What To Expect From The Large Hadron Collider's Second Run 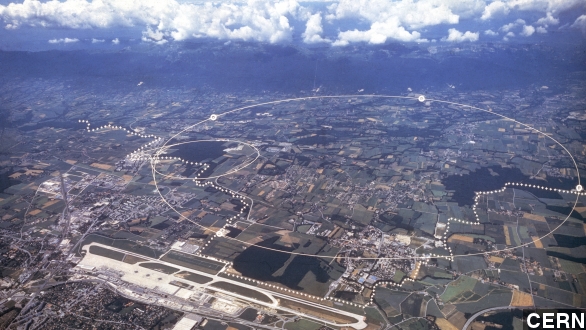 By finding the Higgs boson in 2012, CERN's Large Hadron Collider made the discovery it was built to make.

But with a machine capable of simulating what the universe looked like less than a billionth of a second after the Big Bang, physicists have plenty left to discover.

Tara Shears, a physicist working on experiments at the LHC, told New Scientist, "We're doing this because we've got unfinished business when it comes to understanding the universe."

The Higgs boson was the last missing piece of the Standard Model of particle physics, a theory that's been making accurate predictions about the subatomic world for decades.

"It explains how the atoms that make up the world around us — this table, these chairs, the fruit in this bowl — how they're held together and interact," says a BBC science reporter.

The LHC went offline in early 2013, so it could be upgraded. Workers spent nearly two years refitting the powerful magnets that control the particle beams and testing the new equipment.

The upgrades mean the LHC's second round of experiments, beginning in spring 2015, will be able to smash protons together with around 60 percent more energy than before. Higher energy means more opportunities for CERN physicists to discover something new.

CERN spokesperson Dave Charlton told the BBC: "We don't know, really, what new physics we're going to find when we switch on again. It's really a pure science endeavor."

One of the more important things the LHC could discover this time around is evidence for supersymmetry, a popular idea that expands the Standard Model and makes some interesting predictions. (Video via CERN)

The main prediction is that all of the particles we know of from the Standard Model should have nearly identical twins out there somewhere. When physicists assume supersymmetry is true, some of the toughest problems in physics work themselves out. That makes the idea really attractive.

Stephen Hawking said at a 2013 conference, "I think the discovery of supersymmetric partners for the known particles would revolutionize our understanding of the universe." (Video via The Guardian)

There's just one problem: To date, not a single supersymmetric particle has ever been detected, either in the LHC or any other particle accelerator, and many physicists are starting to abandon the idea in search of a better one. (Video via CERN)

In a way, the LHC's second run puts supersymmetry on trial. If no evidence of it turns up, a majority of physicists might move on to something else. And even if evidence is found, it's likely supersymmetry doesn't work the way physicists first thought.

CERN physicist John Ellis said, "I believe that whether we discover supersymmetry or not, there is potential for a rich new spectrum of particles to be discovered at the LHC."